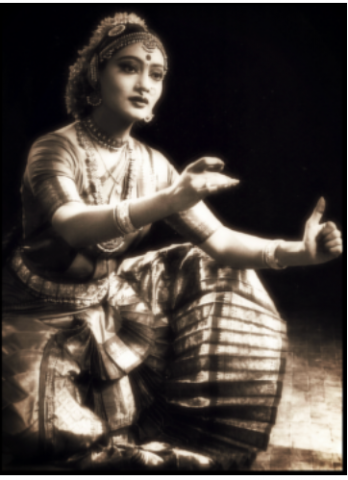 
A Tanjore-style Bharatanatyam dancer, Sudha Krishnan’s career spans over two decades. She is currently teaching over fifty students at Nritya Laya Darpan, her dance school established in 2009, imparting Bharatanatyam to young children and adults. Originally from New Delhi, India, Krishnan immigrated to the US after her marriage, and has managed to pull off a balancing act like no other: maintaining the South Indian classical dance form of Bharatanatyam in an ever-modernizing US. Today, she lives with her family in San Ramon, CA.

I lived in New Delhi, India.

I got married and I migrated with my husband. At the time, I was nearly 22.

I arrived in October of 2000 in San Francisco, CA. Here’s a bit of a story for you: I got married very young. You know, in our generation, it was very natural for your parents to choose your life partner. My parents also believed that accepting the alliance, from a known family, would help me pursue my career. I wanted to study more, I wanted to pursue [Bharatanatyam] dance. The only part that I probably did not like at that point was migrating far away from my family, because I was just 21. And I didn't want to leave my parents and go that far. Until then I had not stepped out of my parents’ house ever. Not even sleepovers! Now, you're at least familiar with what it means like to stay away from your parents, but I wasn't exposed to any of those things. My parents, though, said that it would be in both my and their best interests if I got married young, as they would have less responsibility. They reassured me that I was in safe hands, and this family that we know is going to take good care of me. "The boy is also a mridangist, or a percussionist. And you know, that would make a great combination. My soon-to-be husband had just then left from India after his five-week vacation. He was already living in the US, and working here in the US since 1997. And he had come on a five-week trip, and had just gone back when the alliance came through. Since he was in the US, our first meeting was vocal; we spoke over the phone. I talked about my passion, dance. I had just begun to give stage shows that were more on the organizational banner rather than my self-banner - that meant a lot in those days. We had a nice conversation, but then the question was.... do we want to wait six to eight months or do we want to go ahead with the marriage? Both of us wanted to go ahead with it, as he was very supportive of my dance career.

Tell me about the journey to the US.

I didn't enjoy it. Being from a middle-class family, my flying experience was limited at best. I probably flew in an airplane only twice before that voyage, so I was rather clueless. The very first time that I went to an international airport with my husband, I was in awe: "What do you do next?" Being a very traditional Indian girl, I was decked out in a sari and bindi, and the whole clan came to see me off. It was a unique, slightly weird experience, but nothing deep or reflective occurred to me; I didn't have the wisdom, at that point, to look beyond what's happening right now. I did know, however, that I was leaving all of my family and the world, as I knew it, in the microcosm of India, behind. And throughout the flight, I don't think I ever slept.

On the day I landed, in October, the daylight savings time had changed. First and foremost, time zones were a hard concept for a first-time international traveler like me to grasp. We've all read about the geography of the Earth, but to actually travel from India to America and cross those time zones...It never hit me until then. And now, the concept of daylight savings time! I loved driving cars in India... I started when I was 14. I would hear stories that highways in other countries were pristine, smooth, and that you could just enjoy the ride. I was looking forward to my first drive in America. I was really excited to experience the freeway. Guess what? The long drive I was expecting was definitely not my first one; my husband had his apartment rented just five minutes away from SFO Airport. But I made sure that I drove an ample amount on the highway for the months after.

What was the hardest part about being an immigrant? The best part?

As I said, the hardest thing is leaving your parents if you're not exposed to living by yourself. It's a very hard thing to do, because for me, I'm the only child for my parents. And just coming to a new country, knowing that I cannot turn back and go to them. That was the hardest thing for me because I used to wake up in the middle of the night and start crying without knowing why I'm crying. I couldn't express my despair. I myself didn't have the clarity to realize I wanted to talk to my parents. So my husband would dial my mom's number and give it to me. And after speaking to her for 15 minutes, I would calm down. So he then realized that, whenever I'm crying, or having a meltdown without being able to tell what is bothering me, I'm probably feeling homesick. The best thing is that America is a land of opportunities. If you think you have made up your mind to do what you really, truly aspire for, there is no stopping. That's the best part - this nation doesn't see any age restriction to study. Education is limitless.

What were some learning experiences you had when you came to the US?

I had to learn driving again, because I couldn't get the hang of merging into the freeway or exiting out of the freeway. I did make a lot of mistakes and I thank my husband for standing by me and bearing all the mistakes that I made. I remember the first time I had to drive by myself. We had moved away from our first apartment to a different city that was across the bridge. And I had to go back to our old apartment, clean it up, and pick up my husband from the train station. It took me an entire day to do all of this! That was one experience I can never forget.

As time has passed, how does your experience compare to what you expected?

I think it was far better than expected. It was not planned. To a large extent, things just happened through the course of time, and that's the best part. When you start planning too many things, you start thinking that you have control of them. And life is best enjoyed when you don't have control over most aspects.

I've become a lot more independent. I don't think I would have been this independent of a girl had I been staying longer than I did with my parents. I think the decision that they took worked out well for me.

What advice would you give someone arriving in the United States today as a new immigrant?

I don't think I need to give any advice to anyone - the generation has changed. I see young people migrating right now, from India to the US, and they are migrating young, but they aren't as young as I was then. If they are as young as I, then they're coming to study. They are more mature and they know what life looks like in the US. There's so much exposure through pop culture, the internet, etc. There's a lot more awareness.

Tell me about how the move to the US affected your career in dance.

It almost felt like you know, something was snatched away from me. I was not going to be close to the center of Bharatanatyam. But thankfully I got encouragement from my family. And I took the initiative to seek out another dancer, also from Delhi, and we danced in her garage. I used to practice whatever pieces I had learned. She taught me a couple of pieces, which I'm ever grateful for. But then we moved to Fremont, which was much far away and I couldn't keep up with driving or commuting all the way to a place which was 45 minutes away. So, to keep in touch with the art, I started teaching. I first had just one student. One would come, and after they graduated, another would come, and the cycle continued. But over the course of the next several years, I grew my teaching pool, and set up a school. Now I teach over 50 kids.

Walk me through the journey of setting up your Bharatanatyam school.

It's been a long journey, and it has been wonderful because I have learned a lot. See, you're never taught exactly how to teach dance, and I was always focused on performing. So, I had to shift my perspective. I remembered how my Guru in India would teach, using a small stick, saying the syllables. And little by little, it started coming back to me. And I used to work really hard in reading up on all the steps. I would make sure that I know what I'm teaching for that day and I'm not stammering in front of them. We're also part of the Sathya Sai Baba Center here, and one of the members wanted me to teach her daughter at her house. With her daughter, a few more girls joined. And it continued to grow. But over the journey, I surely made lots of mistakes. I learned from them, though. Like I said, I never knew that I was going to set up a school. I started teaching in early 2001, without a school name and without charging fees. Sometime in 2004-2005, I reflected, and thought: one goes, one comes, one goes, one comes. Where am I going with this? What's my ultimate goal? I wanted to get these kids' names out, and I wondered how they'd brand themselves: as Sudha Krishnan's students? Or as part of a larger banner? That constant vision kept coming back to me, and in 2009, I came up with a name for my school: Nritya Laya Darpan, which means reflecting upon the art of dance and rhythm, because my husband is a percussionist, and I always wanted to bring the dance and percussion element together.

What have been some of the biggest learning experiences? Most rewarding times?

As a teacher, the most gratifying moment is to see your student perform on the stage, which I had to wait very long for. And, finally, it happened in 2018. When I presented my first student's arangetram (maiden performance). After almost 17 years of wait, 17 years of teaching... that moment came to life - to see her dance on the stage completely on her own was magical. Also, every dancer has a dream, irrespective of the country, to have a space of their own to dance and to teach. And I also had that dream. And with God's grace, and with all my efforts, today, I have a studio, which is just a stone's throw from my house.