First Days Project
My name is Padmini Banerjee.
"Having spent my life in India, where you could not imagine the absence of sounds or people, this almost-silent but quaint lamp-lit storybook street in Zurich for me became my emblem, my prototype, of this other world I had just entered." 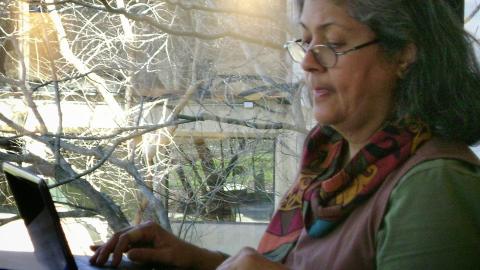 I cannot recall when exactly it dawned on me that the life I had lived up to that moment was ending in a sense because I was leaving everything familiar behind and did not have a clear idea of what lay ahead. Perhaps it was when I climbed the ramp steps to the waiting plane on that sultry August night backlit by the distant glow of the city that proverbially never slept, the city of my birth and childhood memories. As I stepped over the threshold through a palpable wall of evenly cooled air, it was as though a switch was thrown. I could no longer glimpse what I was leaving behind as the stewardess ushered me wordlessly with a welcoming nod and faint smile through a curtained doorway to my seat.

The interior of the plane was darkened, and I could hear the hum and swish of air-currents. Most of the through-passengers were fast asleep which explained the hushed atmosphere. Not long after, the hatch was fastened shut, the intercom came on, engines revved up, our aircraft began to glide forward, stopped, turned and started down the runway, then hurtled forward, faster and faster, wheels grinding. I could glimpse the curve and sweep of the beloved shoreline and the beaches of my childhood and youth as we suddenly lifted off.

I had not anticipated this moment until it arrived. Tears welled up and my throat was tight as we swiftly left land behind and climbed into the cloud layer. I became conscious with every passing second that we were hurtling farther away from this land of my birth along with all that was familiar. The future and my destination were unplumbed entities. I realized that all I could do was to hope and trust in life and the force of my own destiny. I am not leaving for good, I will be back​, I thought. ​ I will see the world and come back home. ​It was my last waking thought before I fell asleep.

Arriving at dawn, no longer glimpsing my co-passengers or cabin crew, I felt abandoned as I walked with passengers from other flights, trying to interpret directions in languages other than English. Zurich airport was cold, cavernous and deserted at that hour. I was glad to be wearing my mother’s old green woolen coat over my beige-colored churidar-kurta and my favorite paisley-printed scarf wrapped about my neck.

Pulling my bag along, I felt like a moving island sporting familiar landmarks awash in a sea of uncertainty. My world had shrunk to this, I thought. It felt like a dream impossible to wake from. I wondered if I was the only one feeling suspended between worlds.

Beyond the meandering queue, I faced a stern-looking official who exchanged my passport for a transit visa. Unnerved by this unexpected “loss” of the little book that my very life and identity seemed anchored to, I suggested that I could wait inside the airport. But, no, I really had no choice as my flight to New York left from a different terminal. Not to worry, indicated the man somewhat tersely, I would get my passport back when I returned my transit visa.

It was drizzling, cold and damp in the city. Architecture and street-lamps contributed to the old-world feel. However, something was amiss. I couldn’t quite put my finger on it and then it dawned on me suddenly how hushed and quiet everything was. Having spent my life in India, where you could not imagine the absence of sounds or people, this almost-silent but quaint lamp-lit storybook street in Zurich for me became my emblem, my prototype, of this other world I had just entered.

Relieved to see my passport again, I waited for my flight with scores of families, students, businessmen and piles of baggage. Waking for meals, I slept my journey away. The rippling waters around the Statue of Liberty were a refreshing blue as we landed in JFK a little after 3. The sunlight was golden-yellow and welcoming. I felt incredulous that 24 hours had gone by and it was still late afternoon on the same day. Then reality stepped in.

Over the next two hours, passengers from all incoming flights– and I - trudged through fluorescent-lit windowless corridors and waited in long zigzagging queues in extensive echoing halls until finally I stood before an immigration official with a deadpan expression who asked me questions, stamped my passport, and said “Welcome to the United States.”

It hit me that I had finally arrived as I wheeled my bags out into the busy concourse. Somewhat dazed, I took a limo into the heart of Manhattan and hailed a yellow-cab to take me to where I was to stay that night before traveling to the campus-town that was to become my home for the next few years.

I stood at an intersection near Port Authority Trust and looked up at the skyscrapers. It was late on a Sunday afternoon and the streets of mid-town Manhattan were deserted. A few people were out and about, but no one seemed in any particular hurry. I noticed then, something I was to observe on subsequent trips to New York that the people I saw on the city’s streets on weekends were, for the most part, black or brown like me.

The cab driver was from Jamaica, he told me, as we drove past the then-newly erected World Trade Center Twin Towers. I craned my neck to look up at the two glittering structures, looking tall and indestructible against a sky filled with warm hues of an early autumn sunset. They were taller than the Empire State Building, my cabbie proudly informed me.