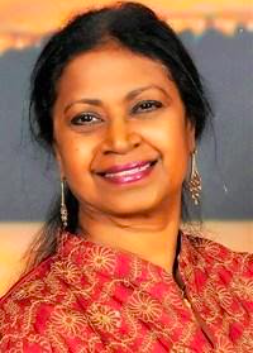 
Originally from Chennai, India, Mrs. Ponni Sivaraman migrated to the US at a very young age after getting married. Barely out of her teens, Mrs. Sivaraman had to adjust to a totally new lifestyle in a totally foreign country. She completed her bachelor’s degree and went on to work for 30 years at the Bank of America, retiring as a bank manager. Now she helps buy and sell properties in real estate. She has two kids – a son, who is a professor at North Carolina University, and a daughter, who is a lawyer in Nashville, TN. She lives with her husband in Houston, Texas.

I was 20 when I came to the US. I had just gotten married.

We came to the states almost 40 years ago, back in early January of 1978, My husband had just completed his PhD in Bangalore, at IIT. And he was already on an American scholarship, which carried him through a postdoctoral fellowship program here in the United States. So, the intent was for us to come here, and after he finished his fellowship in three years, we'd then go back home. The program was at UCLA in California, but we arrived in St. Louis, because my sister was already living there. The thought of her being there was comforting for us, being new to the country, and so we decided I would stay with my sister for a couple of days while my husband would travel to Los Angeles to look for an apartment for us, and then bring me over.

How was the journey to the US?

It was exciting. It was scary. It was fun. It was a lot of feelings mixed together. You know, I was very nervous at the thought of coming to the United States. It was always a fantasy in those days, because not everyone could come to America. You hear that America is a beautiful country full of opportunities when you're a young person in India. When this opportunity came up, I was very nervous...I had to leave home, leave my parents, you know, the only thing that I knew all my life. But I was excited and happy at the same time.

When we arrived at the airport, I was very, very nervous because we didn't know what to expect, and everything was so foreign. Seeing my brother-in-law when he received us at the airport was wonderful, and we knew we'd figure our new lives out!

It was the middle of winter in Missouri, and there was so much snow on the ground! And it was a feeling that I had never experienced before. It was beautiful...oh, my goodness. What a beautiful country! There's white snow everywhere. It was very cold at that time, but it didn't matter too much. Because we were excited! The roads were so clean, and the traffic so much manageable. It's not like Chennai, where people were coming in from all directions. So those little things fascinated me, and I was very excited.

What was the hardest thing about being an immigrant to the US?

The hardest thing was that everything was strange, everything was new. We were not used to this kind of life. My first visit to UCLA was a bit of a culture shock. In India, we are taught to respect our teachers and not call teachers by their name, just Ma'am or Sir, and here it was, "Hey, Sam!" "Hey, Henry!" and you know, everybody was on a first name basis. Everything was different. Then we got homesick and I think that was the hardest part. And we didn't have the technology we do now. We used to have to call home on phone lines where every second cost money. And by the time you could say hello to each one of the family members, your time is up.

The best thing was that we made a lot of friends quickly. We had come out of our comfort zone, so it was easy to socialize and make friends. Socializing was only hindered by the language barrier, you know. Even though I was educated in an English Convent/Catholic school back home, we spoke British English. So, it was difficult for people to understand us. Plus, they found that we were speaking very fast. They would always ask us, "Can you slow down? Can you repeat that? Can you repeat that?" It's so funny, we later on had to watch TV shows like Mr. Rogers' Neighborhood and Sesame Street to pick up our American English.

How did you adapt to living in the US? How did you deal with homesickness?

It was very hard, because, by the time you write a letter and it reaches home, two weeks go by, and by the time they write a reply back, it's another two or three weeks. So, communication at the time was very difficult. Every time we'd call, I'd tell my family members "Don't ask how we are (laughs). We just want to talk!" By the time every family member said, "How are you?", your three minutes was up, and the operator would come on the line and ask if we wanted to extend our time. As students, phone call extensions cost a lot. So, you know, we had to count every penny that we had. Our friends became family and we would get together often and go on picnics trips and see each other. And that helped get over homesickness. Since I had my sister here, that made it a little easy... we communicated with them.

It has made me become very independent and has made me think outside-the-box, more resourcefully. It's made me a well-rounded person. I can't even imagine what life would have been if I had stayed back home, some days I wonder how different it would have been, for better or worse, But I think this is all for the better. Our kids are doing well, our family is happier, and this is a country where your dreams can come true. So, I think it benefited us all around.

Little cultural things that happen at home, especially during holidays...We aren't there to participate in family festivals. And when our elders get sick you really want to see them right, and be with them, but you can't - you have to wait over 22 hours, to travel by plane, and sometimes you couldn’t even go when you wanted to, due to financial reasons or visa status. My mom and dad have passed away now. But there were times when they were in the hospital or were not doing so well. And I couldn't go.

As time has passed, how does your experience compare to what you expected?

Like I said before, our intention was to come here, finish that three-year program and go back. But then after two years, you know, life happened. My son was born and so we couldn't travel immediately. And after my husband finished the three-year program, he got an offer from Rice University to come teach. And that was such an amazing opportunity! They were also going to sponsor us for our green card. So naturally, you know, we accepted the offer. And then we said, let's wait another 5 years before we think of going back. And 5 became, you know, 10 and 15. Life had its ups and downs but we learned to deal with it all. Our kids grew up and went to school here. Our kids faced a lot of hurdles at school as well – it was like they were a cat on the wall: do they identify as Indian or American? It was always a toss-up. But overall, looking back, I think we made the right choice. Life was pretty decent, things are much better. We are happier. We have good friends.

What advice would you give someone arriving in the United States today as a new immigrant?

As early immigrants in the 70’s, we laid the path and opened up many opportunities for the future generations to have a better life. Things have changed a lot...people coming in now are much more educated, much younger, more resilient. And technologically, things have developed so much that it's so much easier for people immigrating now. The availability of commodities is far better. When we came, there were not many new Indian stores, and we knew no other culture besides Indian, so it was a massive adjustment. All we knew was South India, South Indian food, South Indian culture, and South Indian grocery stores. But exposure to cultures is so much now. People in India go out and eat Chinese and Mexican and Italian food more than we do here! So, they're already used to this way of living. So, migration now... it's going to be a bit easier in some ways. In some ways, it's not so easy. I think that friendships that we made then may not be available now. Because it's every man or woman for themselves now, I think. So, to the new immigrants, don’t take what’s given to you for granted. Give to others and help as much as you can.

What is your definition of being American?

I feel every person living in America has immigrated from some other country or has roots that take them to different parts of the world. So, there is no true American. What makes one American, your citizenship and some rights given to you. Honor and respect, it and be a good citizen... a good citizen all around. A good American is no different than an Indian or Russian or a Chinese person in their background, but learning to live together and treating everyone the way you want to be treated makes you a good American. We're in a land of opportunity, where all dreams can come true. Help everyone as much as you can, you are given the freedom to make your own choices so make the best choice. Take care of your country, and your country will take care of you.