"And also the first time we went to like these, huge malls. It was crazy for us, I mean I’d never seen anything like it before." 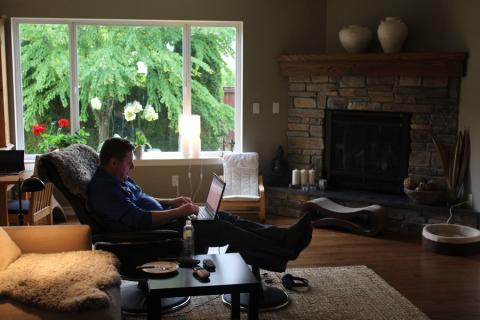 
In the United States, moving for a job is a common occurrence. However, people generally don’t have to move to an entirely new country and leave their children behind. Such is the case of the Åkerbloms.

Maria and Pär Åkerblom moved to the U.S. in 2010 after living in countries like Sri Lanka, Denmark, and their home country, Sweden.

Although they visited the states before actually moving here, relocating to a new continent was not easy. If moving wasn’t already difficult enough, the Åkerbloms also chose to move without their children.

Things got easier, however. After the complications of visas, green cards, and taking inventory of every item they owned, the Åkerbloms have now settled in North Bend and live with their two cats under the shadow of Mount Si. Pär and Maria’s children are now also in the states, attending college in Seattle.

Despite the challenges of packing up everything they owned and coming to America, they have no current plans to move back to Sweden, but they have been entertaining the idea of spending their retirement back in Europe.


MARIA: My name is Maria Åkerblom and I am a financial analyst.

PÄR: And my name is Pär Åkerblom and I work as a senior program manager for Microsoft.
The first time I came here I think it was when we went to Florida in Fort Lauderdale. So it was just for like vacation. I mean it was just more like beach and good food and sunshine.

MARIA: But the impression was that the roads are so… I mean there’s so many lanes, the cars are big. But in Florida of course it was so many sport cars, many new cars, and just so many cars!

PÄR: And also the first time we went to like these, huge malls. It was crazy for us, I mean I’d never seen anything like it before. I didn’t really know what to expect, coming here.
Moving here for me was in the end of July 2010.

MARIA: And I moved here beginning of October, or end of September in 2010.

PÄR: So I was working for Microsoft in Copenhagen, Denmark, there were some layoffs in my division and if I wanted to continue to do the same thing as I did in Denmark, my only option more or less was to move here.

MARIA: When you’re at the airport you have to leave the kids - it’s crazy hard. It’s crazy hard. We didn’t know what the future would bring; I mean for how long we were going to live apart or be in different corners of the world. But it has ended up great.