"Looking back on that first day, and the events transpiring from that day, I can’t help but feel proud and blessed. " 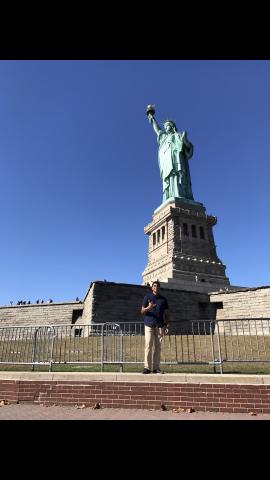 I had been visiting the United States since I was a small child, 2-3 week trips every year to visit family as well as explore a new place or two, however, although I initially thought different, visiting America and living in America were very different experiences.

I was born and brought up in Singapore and was fortunate to receive U.S. Permanent Residency (Green Card) when I was very young as we had family who were citizens and sponsored us. The American dream and achievement of citizenship was brought into my family by my Grandfather, who emigrated from Delhi, India and immigrated to New York City in the late 1960s as he was a physician and wished to make use of the Hart-Celler Act, passed in 1965. Decades later, I too would have my own experience leaving home in Singapore and moving to the US at the age of 16.

My first day of not being a visitor to the United States, but a resident was an interesting and mind-boggling experience. I landed at the Atlanta airport after a long and tiresome flight and was anxious about the future ahead. I would be starting my Junior year of high school in a little under a week and my family and I had made the decision for me to finish my high school education in the United States as the opportunity presented itself. We checked into the hotel and headed out for dinner to what the concierge had told us was a short drive… it was a 20 minute Uber ride. This was my first of many shocks of life in the US, the sheer distance and time of commuting. In Singapore, a 20-minute drive could get you to most places from the city center, but in Atlanta, the average commute was 40 minutes which blew my mind.

The next thing that amazed me was the sheer number of drive-thru restaurants for fast food. We have one drive-thru in Singapore and the concept has not really kicked off at all, however, I noticed that drive thru’s were everywhere and more people got their food and ate in their car than going inside and sitting down, this was unusual for me. The notion that everything was bigger in America really started to come true in my mind as the food portions were huge, the cars so much bigger (many more SUVs on the road) and the highways large and intimidating.

The idea and existence of suburbs was also very new as I had grown up in the center of a very urban environment and was not used to seeing so many houses and neighborhoods. One thing in particular that I thought was only in movies was the cul de sac which I realized was a common theme in neighborhoods.

On that first day, I thought to myself what my future would be like in America and a few years on from that first day, I graduated high school with honors, am now a student at the University of Michigan, and in January 2020, received my US citizenship. Looking back on that first day, and the events transpiring from that day, I can’t help but feel proud and blessed.

The picture is not from my first day, but from 2017 when I got the chance to visit New York City with my school. It had always been a dream of mine to visit the Statue of Liberty and I got to do so!