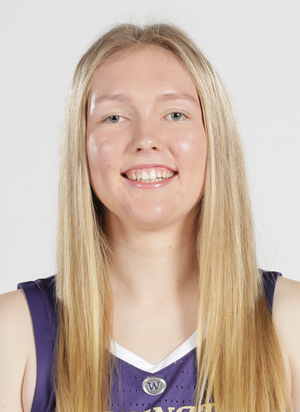 
Darcy Rees, a freshman on the University of Washington women’s basketball team, came to Seattle this past summer from Adelaide, South Australia. She first came to the United States to tour the school in February 2018, then came for summer classes in June, and moved in full-time before fall quarter started. A 6-foot, 4-inch center, Rees played for the Australia U-17 National team through 2017, and made the U-20 National team last year before crossing the Pacific Ocean to continue her athletic career in America.

Rees is one of a handful of current UW athletes from Australia and Oceania, and talks about her first impressions of America after her long flight over, as well as her experiences settling into her life in Seattle.


I flew to L.A., and then I flew to SeaTac, and obviously I was very tired. I had like three flights on the way over to summer school and I was very nervous, but everyone made me super welcome. All of the coaches, the girls, the staff around here. I went straight to one of the coaches’ house and had dinner with her family.

I think the first day was tough. I’ve been away from home many times, but realizing that you’re across the other side of the world and you’re going to live here for four years is a hard thing, especially when you’re extremely tired and you’re questioning why you came across the world to do this. But I think the first day was definitely tough, but I think it was definitely worth it to be like ‘Yes, you can do this, and everyone here is going to make your experience what you want it to be, and you just have to put in the work to do that.’

Obviously the accent helps; it’s a big talking point for everyone. But I think definitely the food. Our food, it’s very similar; everything is very similar, you think coming to America the whole culture would be similar, but it’s not. There’s little things in the lingo, the food isn’t as seasoned, or it’s not cooked the same way, or it’s called something different. Just tiny things like that. Even on the weekend, one of the girls asked me a question, and I responded in how I thought she meant the question was asked, but it turns out that word has a different different definition here. I can’t remember what exactly it was, but it’s just interesting, the little things. I think I’m getting better at it now, but definitely in the summer and definitely in the first two months I think that I’ve been here, probably nearly every day, every hour, I’m like ‘wow, okay just think about it a little bit extra.’ It’s not a foreign language or anything, but just like little words; I’ll understand the whole sentence except for a little word, or I’ll say the word wrong and people won’t understand me because I say the letter R differently. I think that’s been the huge thing for me is going into all of the restaurants and saying my name. A lot of Americans can’t write my name; I’ve been to Starbucks here and they’ve never spelled my name right.