" In capitalism, it gives you a notion that you can, if you play your cards right, maybe you can grow to the skies, but actually very few can." 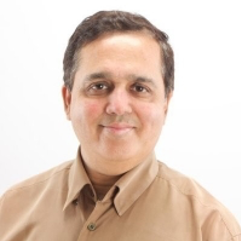 
Born in Ludhiana and raised in Chandigarh, India, Mr. Rahul Diddi migrated to Russia in the former Union of Soviet Socialist Republics (USSR) for studies. For his MBA, Mr. Diddi moved to Kalamazoo, Michigan, passing through New York. Now he lives in Central New Jersey.


Where (city and country) were you living before you came to the U.S.?
Before I came to the US, I was living in what was then the Soviet Union – it doesn’t exist anymore.

You were born in India, so how did you get to the USSR?
I went to the USSR to study. I had an Indo-Soviet scholarship that I got in India when I was 17.

Where were you born in India?
I was born in Ludhiana, in the Punjab region of India. And I grew up in the capital of Punjab, Chandigarh. I moved to Moscow at 17 and moved to the US at 23.

What caused you to migrate from your home country to the US?
I came for an MBA program and for a brighter future.

What year and where did you arrive in the United States?
I believe it was the 27th of August, 1983. I arrived at JFK Airport in New York City.

What are your memories of your first day?
Oh, it was a crazy day. Because I had nobody receiving me. I was all alone with a total of $300 in my pocket. By chance when I was flying on the second leg, from London to the US, there were a lot of free seats, so they bumped me up to business class. In business, there was a lady sitting next to me from the Caribbean. She was a fashion designer coming from India. And we talked on the way and she was really nice. She introduced me to her father. And they both realized that I had nowhere to go. And so, they took me in for the night. And we dropped the lady where she was living in Manhattan. And the father drove me to their home in Harlem, which is a poor District of New York. And I spent the first night in Harlem, with him, his wife, and one young daughter.

What are some interesting experiences you had after immigrating?
Well, I was stopping in New York because I had admission at Columbia University. And there was a professor there that I wanted to meet. And the next day I went to meet the professor. I had admission, but I did not have a teaching assistantship. So, without the teaching assistantship, I didn't have the money to study at Columbia University. And so, I wanted to meet with him at least once and see if anything could be done. I stopped over the next day. And the daughter of this lady, who I stayed with - the Caribbean lady. She went by bus with me to Columbia University, New York to go and meet with the professor. I met with him, and we took the bus back so that I could then pick up my stuff. Then, I went to the train station where I took a train from New York to Kalamazoo, Michigan. The ticket fare was $116. Out of my $300, I paid $116 for that. By the time I arrived in Michigan, I had less than $200 in my back pocket.

How did you adapt to living in the US?
Well, that takes time. You know, there's nothing you can do. As you start taking classes, they inculcate confidence, and you do well in the subject that you're studying. In the class, you listen attentively and work hard... gradually you're bound to gain confidence.

How did your experience in the USSR compare to America?
Well, the Soviet Union was a whole different turkey. So in the Soviet Union, there were very few people who were very rich. And there were very few people who were very poor. So in a way that was good, because you do not see poverty on the street. There are good things about it. But on the other side, the negative thing was that you feel like there is a lid on top of you, and that you cannot grow to the skies. In capitalism, it gives you a notion that you can, if you play your cards right, maybe you can grow to the skies, but actually very few can.

What was the most difficult part about leaving the USSR?
I had a girlfriend there. And so, you know, there was a certain amount of heartbreak involved. And I thought I would come back in a couple of years and reconnect after I finished my MBA. But that was not to be.

How did India compare to the US?
India versus the US is also a very difficult comparison because they're in very different stages of the economy. And the US is a very developed economy and India was a developing economy, and particularly in the early 80s when I came. In India, things began to change towards the late 80s, early 90s you know. When I came, India was more socialist oriented. And the growth pattern was measured and therefore, salaries were low still. It was difficult to visualize a bright future in India at the time. We had to come to faraway countries. We hope that our kids don't have to do that; they can still remain close to us physically. Because, you know, there's enough opportunity in the US. Wherever our parents live in, we can hopefully, you know, build a more nuclear family.

What most surprised you about the US?
Nothing really overtly surprised me. I quite expected what I came to see, you know.

Who was the person who you could lean on or who was an inspiration during your process of reinvention?
Yes, of course, there's more than one person. When you are making an effort, and you know you reach out, people help you. The first person who helped me was my uncle, who was in Michigan. He was a professor at the university where I came to study. And I stayed with him for some time. And he took me into his family. I'm deeply indebted to him. Another person was my marketing professor - Dr. Zaheer Qureshi. And he was extremely helpful to help me get my feet on the ground and helped me get my first scholarship which mattered a lot to me.

What advice would you give someone arriving in the United States today as a new immigrant?
Plan as much as possible. Don't land without having anybody there to pick you up - just don't cold call and land.