First Days Project
My name is Klementina Mato.
"I was now somewhere that I would never imagine I would be, somewhere where every day seemed to be different and adventurous." 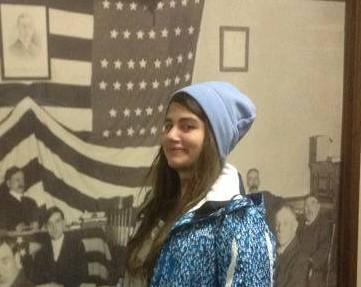 My name is Klementina and it is not pronounced like the song “Oh, My Darling Clementine."

I was seventeen years old when I won my first scholarship for an exchange year in Sitka, Alaska. I come from a small town in South of Albania, a limited place, but welcoming with a very warm weather. I was excited about this trip, but at the same time scared because I didn’t know what I would face. For me, Alaska was an untouched land. I had some expectations about this unknown land, but not all of them were true.

This was my first trip to the US, first trip to Alaska, first trip with an airplane and first time that I traveled by myself. The flight was extremely long, but my mind was exploding with the idea that I was now starting a new adventure and somehow the flight became more interesting. I thought about the new people that I would meet and if I would be able to understand them. I could understand English, but subtitles were always more helpful. Then I thought about Sitka. I was thinking maybe the clothes that I was wearing wouldn’t be warm enough, but again those were only expectations. I had to wait to find out.

My first stop was for three days in Washington DC, which meant three days of sightseeing and exploring. During my trip from the airport to the hotel, I noticed that almost every house had the American flag hanging outside their house. It made quite an impression on me and my friends that were on the same program. We had never seen something similar. I knew Americans were proud people, but I didn’t expect as many flags, at least we don’t do that in my country. Everywhere we went we were surrounded by the American culture and the English words were a must to use. My English was good, but not quite as good as I thought it would be. English was the only language I could use and that wasn’t helpful at some points. This was the time that I could really use those subtitles. Americans talk fast and I wasn’t prepared for that. I could only hear them blabber each time they opened their mouth to tell me something. My brain was trying to translate everything at the same time as they were talking and that made everything harder. However, what was the most interesting was when they were trying to put an accent to everything that seemed foreign, especially my name. I remember always saying to my American friends,” My name is Klementina and it is not pronounced like the song Oh, My Darling Clementine.”

The fourth day I continued to my last destination Alaska. The trip was long, but a small stop at the Seattle airport made it easier. Again, I was faced with a massive airport, like the one in Washington DC. To me, it looked like a small city inside the airport. Restaurants, cafes, or the world known Starbucks were everywhere. Musicians were performing in the middle of the airport. I stood there for a moment and I started listening to the melodic Jazz that they were performing and at the end I clapped. Yes, I clapped. I figured that everyone would clap after that beautiful performance, but instead, a silence broke out. It seemed weird to people around me, even the performers were a little bit shocked, but they nodded their heads in appreciation. I guess that wasn’t a thing to do at the airport, but my excitement was far beyond imagination.

After I got on the plane there were only four hours separating me from Alaska. I kept my window open and the views were amazing. As we were approaching the countless mountains I was able to see the “Two oceans that meet, but never mix.” It was exactly what I expected it to be, like the pictures that I have seen on the internet, but the views felt alive and breathtaking. In one’s mind Alaska is expected to be a place with a very cold weather, people living in Igloos, Eskimos, and bears everywhere. I have to admit that I also thought about that especially about the weather so I had packed warm clothes with me. However, it turned out that I was wrong. The weather was warmer than other cities in the US. In fact, I had to give all my really warm clothes away. But most surprisingly of all was that I never had the chance to greet a bear in the streets of Sitka. One more thing that really caught my eye was the Totem poles. I had never seen something like that nor exposed to the indigenous culture before. The colorful and carved poles were everywhere, in small and big shapes, each one with different animals that represented the clan of each family.

Sitka had me in awe. I was now somewhere that I would never imagine I would be, somewhere where every day seemed to be different and adventurous. Even though English turned out to be a challenge and the American culture was far more different than mine, I was now starting a new life across the globe. This new life was different from what I expected. I didn’t meet any bears or Eskimos, I had to buy new clothes and I learned how to translate without subtitles. New experiences were ahead of me and I was ready to face them. I was now beginning to change. Alaska became the land of open roads; I could now travel everywhere.