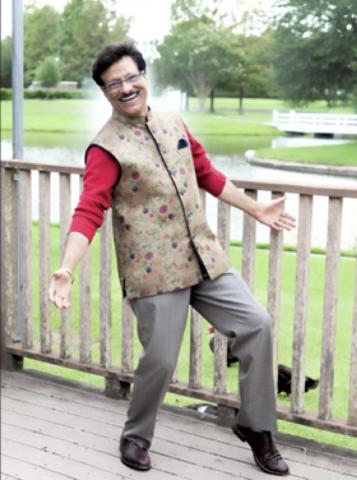 
Born in Chennai, Mr. Radhakrishnan’s journey from “hero to zero, and then hero again” reflects the human spirit of perseverance and he shows great strength through difficulties. He began his career as an actor in South Indian films, but soon left India to pursue a new life in the United States. This is where his dream of being a restauranteur came true. Moving up the ranks from a busboy in New York to a manager in Chicago, he finally became the mastermind behind Madras Pavilion, one of the most successful restaurant chains in Texas.

My name is Rajan Radhakrishnan. My family is from Kerala, India, but I was born and brought up in Chennai, and that is also where I did my schooling from. I was involved in the film industry in India. The reason that I joined the film industry was that (a) I looked handsome when I was young (laughs). And also, my parents were in the industry; my mother was a part of many Malayalam movies, and my father was a choreographer back in the day. I joined Gemini Studios, and because I had some family background in the industry, it was easy to acclimate to the film business. From there, I made one film in Kannada, two in Telugu, one in Malayalam, and nine in Tamil.

During my ‘prime time’, I had various problems. No one believed that I could do anything. I left everything I had in India and came to America in 1993, hoping to restart and make a better life for myself. After a long flight, I landed in New York. At the time, I was 39 years old. Looking back, the best thing about being an immigrant to the US are that this is the land of opportunity – hard work with a clear vision pays off. The hardest thing was definitely keeping up with the culture you left and transferring it to the next generation.

Back to my first day - I took 24 hours of rest, and then thought about the best course of action. My M. Com. meant nothing in the US, and so I had two choices. I could pump gas at gas stations or I could be a waiter at a restaurant. I chose the latter. I began as a busboy – my ego was destroyed, but I still had a focus inside me. Soon, the owner of the restaurant promoted me to the job of a waiter. Being in the cinema business, all of my inner fear had completely disappeared. I talk a lot, and would always strike up a conversation with whoever I was waiting on. The series of promotions continued. Within 6 months, the owner asked me if I would like to be a co-manager at a new restaurant branch in Chicago. I said yes, but I didn’t really feel like it.

But destiny has strange ways; a kind couple, Mahesh and Alpa Shah, would visit the restaurant every day and try to convince me to move to Houston, where there were more opportunities. I followed their advice, and moved to Houston. I created the first branch of my restaurant there. The name comes from the old name for the city of Chennai, and a cricket term ‘back to the pavilion’. I wanted people to keep coming back to my Madras Pavilion (laughs). It was an instant hit, despite my small folly before opening. I didn’t realize that the area I opened the first restaurant in had 0 Indians living there. But it still was a super success! There were 2-hour waits, and within 3 years, I had opened 6 restaurants across Texas.

Through this success, however, I still wanted to keep in touch with my roots. My total monetary contribution to the state of Tamil Nadu, the nation of India, and Udavum Karangal, a nonprofit organization whose name means ‘Helping Hands’, is about 100,000 dollars total. Recently, we helped Udavum Karangal opened up a hospital in the village of Thiruvenkadu in India, and I was a chief guest. Along with managing Madras Pavilion and donating to valuable causes, I kept producing and directing films, of which many are critically acclaimed and have gone to the Film Festival.

In my day, there were no search engines, social media apps/websites, or any of that. Your inspiration had to be pure. My message to the youth of today is to not lose focus and always be inspired. Don’t keep the prospect of failure or troubles in your mind – all troubles/failures lead to success at the end. Be happy, passionate and enjoy life.