"People always say do what you love as a job in the future and I feel like just dancing’s what it is because it just brings happiness to my life." 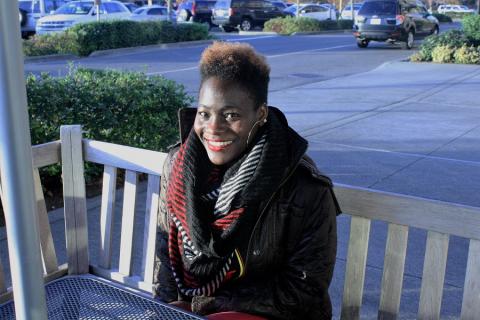 
Niyafath Cakpo, 20, immigrated to America from Benin, Africa six years ago in hopes of finding new opportunities. When she first came here, she was surprised by how fast-paced the American culture was compared to Benin’s. The social scenes also differed as there appeared to be a more in-person focus on social gatherings in Benin while there is a bigger focus on social media in America.

She currently studies at Shoreline Community College. After she graduates, Niyafath hopes to continue her urban African dancing as a dance instructor. In her free time, she dances in Seattle’s Gansango Music & Dance Company which her father founded. She likes incorporating contemporary styles like hip-hop into traditional African dancing.


My name is Niya and I’m 20 years old and I’m a student at Shoreline Community College. This is my second year there. I came here by myself, but my dad was here before me and then he was married to an American woman that they met back home and they came here together. And then 10 years later, he decided to bring me here.

It’s definitely a different world compared to here and back home. People just seem way more serious than back home. Like you would notice some people just standing there and talking and being loud, but then here everybody’s just going and doing whatever they have to do. So that’s the first thing I noticed when I came here.

My biggest challenge coming here was definitely the language. I didn’t speak English at all so I had to adapt to it and try to speak the language every single day, watch movies, and everything.

I got into dancing four years ago when I first moved here. People always say do what you love as a job in the future and I feel like just dancing’s what it is because it just brings happiness to my life. It doesn’t feel like it’s a pressure job. It just feels like I’m doing something and it’s making me happy.

My hope for the future is definitely well I would love to be a dancer of course – like teach people how to dance. And teach people more about Benin because some people have such bad mentalities about Africa. It just irritates me so much. So if I can talk more about it and just be like Africa’s not what you guys think it is. Like hunger is everywhere. It’s just not just in Africa. Everywhere in America there is hunger. And then just to get people from Benin to know that like America’s not heaven like they think it is. Like coming here, you actually have to get your stuff together in your life because people in Benin really think that coming here is like money’s everywhere, you just get wherever you want to go, you’re living with Obama, you go and get to see Justin Bieber and I’m like I swear it’s not like that.