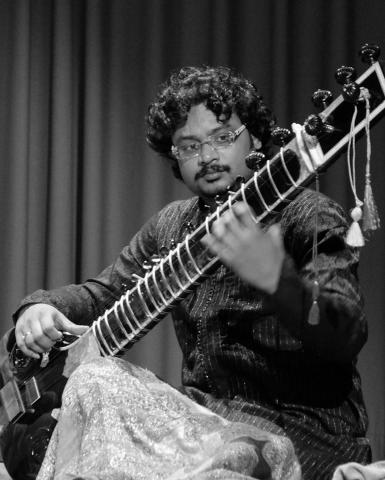 
My name is Rajib Karmakar and I'm a sitar player as well as an educator.

Rajib, where did you come from and what year did you arrive in the United States?

Well, I came from a city called Durgapur which is like a hundred miles from Calcutta, or Kolkata as it's known. And I arrived in the US in 2013.

So you arrived at LAX and what were your first memories upon arrival, either at the airport, or during your first few days in the United States, anything you noticed?

Well, yes, the first memory was very… okay, when I arrived the whole of LAX was going under new renovation. Which is still going, I guess. Like, they're renovating some of the parts. So there was this big holding where it was written in bold letters: "The future is here!" (Laughs) And that's what caught my attention and I was like, okay, that's cool.

Well LA, as soon as I got in, I saw that everything all of a sudden became big, you know? The cars were bigger, the roads were bigger, everything… so I was like wow, this is a total change from what I'm used to seeing. I was living in Europe, but even European roads are smaller, European cars are even smaller. Yeah, so when I came here and went on seeing those buildings and went on the I-5 it was incredible. The whole view of LA was incredible and I could say… I was kind of falling in love with it, you know? But then there was this traffic, and I was like, "Oh okay, this also happens here." But within a few years, it took a few years to get through that, you need to know the pockets. But then after that LA has been my home since then.