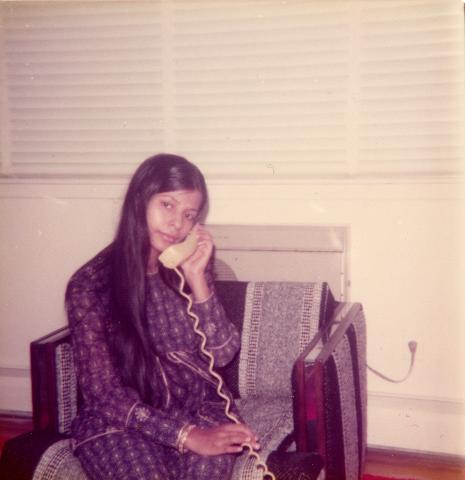 Where did you arrive? Who were you with? Who met you at the airport?

I arrived in Washington DC with my husband, and we were met by friends.

Even after the 24hr flight we weren’t tired because we were so excited to start our new life. We spent our first day looking around for a more suitable apartment. It was very exciting

Where did you live?

We lived in Hyattsville, Maryland. which is a Suburb of DC

What were some new things in America that surprised you?

What surprised us were the very small things like the mailman pulling up in a big Ford automobile, he was not like the mailman in India. I was also really struck by the amount of equality and conveniences for everybody.

What were you thinking America would be like? Was it the way you thought it would be?

Yes I was very homesick for about two years. We had planned to return to India in five to seven years, of course that did not happen. Your grandfather was working toward his Ph.D, and we had no money because his scholarship was meager. He drove a taxi to earn extra money, but not enough for us to visit India in the first three years.

Why did you stay?

We stayed mainly for the opportunities that America offered in terms of our careers and financial freedom, but also because this country was very efficient with an infrastructure that worked almost all the time. And the fairness with which the system worked really appealed to me. For example, If I passed my drivers test, I would get my drivers license, I wouldn’t have to bribe anyone or get my license through connections. The sense of independence also appealed to me- we had one car for the two of us instead of one family car for six people. We truly enjoyed the fairness and efficiency of the system here.

Do you still think America is fair?

Until recently I thought that America was fair, but I also realized that a lot of the time I didn’t recognize racism. There were random comments, and I chalked it up to lack of knowledge or ignorance. When your mother and your uncle faced racism in school, they never came home and told us, until an egregious incident on the bus which your mom reported to us and we went to the principal and thought it was all taken care of. We recognized racism when your grandfather was rising in the ranks as a scientist at Corning Glass Works- we noticed beyond the rank of director everyone was tall, light-eyed, and of course Caucasian like the founding family. But the beauty of America is that after that realization, we decided to move to California and your grandfather got both partnership and executive position in what you would call a startup company.

What were some of the fun things you did when you came?

In the early days, we traveled as much as we could afford. Our first trip was to Niagara falls, and we were in the DC area and there were lots of places to visit. We would go to the beach a lot. We also socialized, and we went to cultural events. We went to concerts both American and Indian.

What was your favorite place to visit in America?

Niagara falls was grand. Niagara Falls, the Grand Canyon, and the natural places were most appealing to me. The finger lakes in Upstate New York were really beautiful. The beauty of nature in America can compete with anywhere else in the world. I don’t know if there is any more beautiful fall foliage than Virginia. The woods like they’re on fire, but such tranquil fire.

What was your first job?

My first job was working in a department store for a few weeks, and after that I worked as a desk clerk at the Watergate - famous for the Watergate scandal - it was here that I began to pronounce words in a more Americanized fashion. I would say “laff” instead of “laaff”! Then I worked at the state department as a language instructor to the diplomats going to India and Bangladesh. I also worked on weekends on Voice of America as an announcer. In both these jobs, I could have made a career, but I moved away when your grandfather got his first job. Then I had two kids, your mother and uncle, 19 months apart. So all I did there was raise babies. While I enjoyed it, I also got bored and wanted to work my mind. When we moved to upstate New York, the local church had sponsored a family from Laos, and they didn’t speak English. This family found out that I had a masters degree in English and approached me to teach their kids English. They had eight kids who ranged from elementary school age to high age and that's when I decided that I would like to be a teacher.

How did you reinvent yourself in America?

I reinvented myself in every way. Professionally, my masters degree was in British literature, but I had the opportunity to teach higher-level classes in American literature, and that slowly became my specialty. Personally, I realized it was better to be less judgmental of others and to have friends of different backgrounds. Having to do everything at home; driving the kids to their activities and their schools, that was all reinvention for me, because that's not how I was raised. I was raised with a lot of help in the house. I was raised with someone driving me or my family because we were able to have a chauffeur. So in that sense I really reinvented myself, but more than those new skills, it was keeping an open mind about everyone and everything.

Did you ever have any doubts?

No, but I was anxious. Adjusting was hard, but this helped me learn that the harder you work your mind the sharper it gets. I realized that I could attain a lot through working hard.