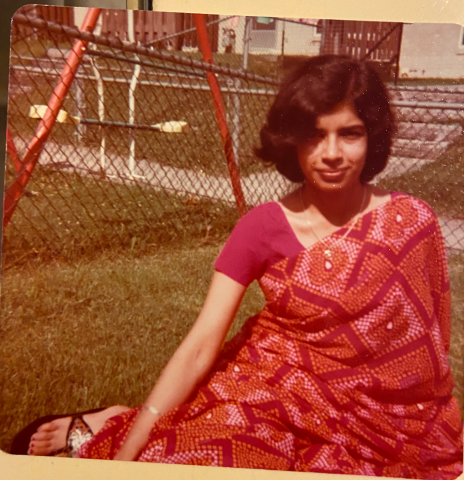 What is your name?
My name is Ranjana.

What year did you arrive in the United States?
1978.

And how old were you then?
Good question, I think I was 27.

Where were you living before you came to the US?
I came to the US from Canada, where I stayed for about nine months, but prior to that I was in England for a few years and prior to that I was at Nairobi, Kenya, where I was born. [She was accepted to the University of Kenya at Nairobi, but her admission was rescinded for political reasons because she was not a Kenyan citizen. This meant that she had to seek higher educational opportunities outside of Kenya, in countries like England.] My parents really didn't have enough money to send me to England. But I was at the top of my class, and a good student, so they pretty much spent all their money, all their savings, to educate me in England. That is an immigrant story, you know: what does a parent do when their child who was going to university suddenly, for political reasons, was told that [she couldn’t] go to university. So that's how I ended up in England. I went to school in England and so on and so forth.

Where did you spend your first day in the US?
Detroit, Michigan.

Which city and state do you live in now?
Bellaire, Texas.

What brought you to the United States?
I got married to my husband who had [immigrated] to the US from Kenya so I followed him here.

What mode of transportation did you take and how was your trip?
We came from Toronto, Canada, where we were married; we came by car.

What did you do on your first day and what were your first impressions of the country?
Basically we just went to our friend's house and we went shopping. So the impressions--since I had lived in England for seven, eight years, and been in Canada it was nothing substantially different. So there was nothing that really impressed me or that surprised me. Maybe the stores were a bit bigger, like, I remember going to shop at Meyers, and Kmart was still in existence. So those stores were probably a little bigger than those in England.

Compared to other Western countries, what do you think the biggest difference about America was socially and culturally?
I think that can be answered in two parts. Culturally, there's a difference between the state of New York, state of Michigan, or state of Texas. So, culturally, going to Michigan, from Canada; Canada is more laid back, Michigan culturally was, at the time that we moved, I believe that prior to that there had been race riots in Detroit. I got a job in Downtown Detroit [and] a lot of people who lived in the suburbs were afraid of going into downtown Detroit from the suburbs. I mean, these are people who were living in Michigan. So culturally, it was different in the sense that right away, the history of racism was evident. When I took the bus from work, there used to be a park and ride bus that went from Downtown Detroit to close to where we lived, and Downtown Detroit was dangerous or purportedly, reportedly dangerous to be in after five o'clock or something; it was not considered a safe place to be in at that time. Detroit now is very different; I went there last year.

What do you think the biggest difference was between how you learned about America in Kenya or [learned about] the Western world in Kenya, and how you found America? What do you think the biggest difference between your expectations and reality was?
I think that when you're young, you're pretty adventurous. The expectation, if any, was that it was a land of plenty and there was stuff to do. So it more than met those expectations. Especially because we were young and we were educated and therefore it was not a difficult transition. But I was also coming from a Western country; I had lived in England for seven, eight years and I had worked in Canada. So it was not a big shock, it was not a big transition, it was just more of an adventure.

What do you think was your favorite aspect of life in America that you [couldn’t] necessarily have access to in the other places you lived?
The favorite part was that it's a huge, huge place and you could just go from one state to another. Work wise, professionally, in one sense, there were plenty of opportunities. But in a second sense, what really surprised me was that, I was in the IT field at that time, and they were intimidated; the American culture still hadn't come to terms with women in the workforce and they were intimidated by assertive women. Race was not a factor for me, partly because the software industry was wanting the talent.

What do you think you would tell immigrants coming to America today? What advice from your own experiences do you think you would tell them?
America today is very different. America in 2021 is very different [from] America in 1978. There's been a lot of progress. Also, at this point in time or in the past four years because of the division in the country and the anti-immigration feeling which has been stoked, I would ask immigrants to keep that in mind, that when you come here it is a mixed bag. And I'll qualify that further: It depends on why you're immigrating in the first place. So many South Asians who came to the US initially came because they had something to offer; they were highly qualified. So that puts you in a very different class from if you are coming here as someone with not much education or if you do not have something to offer the country. So it's going to be different; the immigration experience can be different depending on who you are in the first place. However, I think there is an opportunity [in America] to work and get ahead, fully recognizing that you may, at some point, run into racism, which may be overt or maybe structural. And that's just my experience. So it really depends. If you are coming here, you're a political refugee and your life was in danger, then certainly I would say to that immigrant, this is the place for you to be. But if you're coming from a comfortable place, say, India, for example, I would say, take a look and decide whether this place is for you and possibly think long term. So I think it just depends on your personal circumstances.

And overall, are you happy that you came and stayed in America?
Overall? That's a very, very good question and answering that now, my answer is different than it would have been a few years ago. I really question this happiness quotient, what that means, but that's coming from a place of comfort and having made it financially. I think America, it has been a huge adventure, it has overall been very exciting, but since I had a choice, I could equally well have lived in England for a long time, I could have stayed in England, I wonder if I would have been content there too, mostly because of the social policies there which, you know, social services catch people who are homeless, etc, etc. America is much more brutal in that way to people at lower socioeconomic status. Personally, on the balance I would say I am happy that we came here; it has just been full of many, many different experiences, most of them have been very good, a few not so good but that's just life. I could have lived in either country.