"I flew over on Saturday night, just still recovering from a hangover." 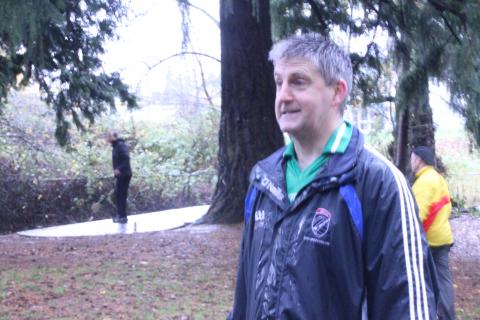 
When I came to America it was in 98, a couple of friends of mine -- it all started off at work in Belfast, and it was a particularly bad winters day. I said to a few guys, "I would love just to go away to America."

One of the guys said, "Are ya serious about that?" He says, "Come you on down to my office." He called Larry Tobin in Seattle, who was a hiring manager for Boeing. Then an agency called CTS called me one Friday evening just before I was ready to go out, they caught me on the phone.

"We would like to interview you in London on Sunday morning."

He said, "Yeah can you get over to London?"

"Yeah, I guess." And that was fine, I remember hanging the phone up and going out and getting absolutely hammered with my friends. I woke up about 10 'o' clock, eleven 'o' clock the next morning and I go, "Oh my god, what am I going to do here?"

I flew over on Saturday night, just still recovering from a hangover. Had a great interview with this guy called Larry Tobin and we chatted for an hour about airplanes, about life in Seattle, life in America, life in general. He said, "Hey great chatting to ya I'll tell ya what I wanna do, I want to offer you a job here." And I remember standing on the tube station which was an above ground tube station and going, "Holy shit."

I got to Seattle and I finished up on the course and I met an English lad, Chris Rhodes, and we turned out to be very good friends and it was like every weekend was such an adventure. We were on Mount Rainier, tours of Seattle, skiing, hiking, camping, out on the Peninsula, down to Oregon, turn out west and off over I went, right over the pass and coming into Seattle man, I knew coming back here, this was the place I wanted to be.