First Days Project
My name is Roshan Sharma.
"On the August 25, 1949 morning, as the American coastline appeared on the horizon, I and hundreds of others went up on the deck to survey the first glimpse of America." 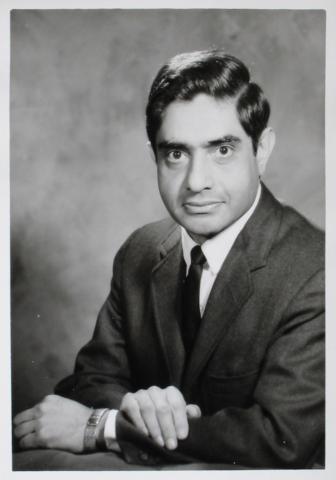 My air trip to Hong Kong, with a short stop at Bangkok, was uneventful. When I landed at the Hong Kong airport, I learned from another Indian passenger about the famous Sikh Temple (Gurdwara) at Hong Kong. He advised me to go straight to that place since I was short of cash and added "They provide free room and board to all folks from Punjab." I followed his advice and I was simply amazed by the hospitality of Sikh hosts. That enabled me to save most of my cash. Every day a new traveler would stop by at the temple and tell me their tales of adventure from many lands. Many of these travelers were wealthy and they would leave lots of cash at the temple in return for a memorable stay. I stayed at the Hong Kong Sikh temple for fifteen days before starting my ship journey to America on SS President Wilson, which was recently converted to commercial use. I was the only Indian on a ship that was carrying hundreds of Chinese passengers in the third class. A small first class carried only a few dozen passengers.

I have a very bad memory of my journey on the ship. For each dinner I was served a plate with boiled rice, a boiled potato, and a boiled fish with its shining eyes peering at me. Since I was still a vegetarian, I was invariably nauseated. The constant ship's roll did not help matters. Eventually I complained to the purser and he arranged a special dinner devoid of the fish but with two fruits instead. But I always felt under-nourished all through the trip. There was one compensation. I would walk towards the fence on deck that separated our third class section from the first class. I befriended a young American passenger and we would talk for hours on poetical, political and polemical matters.

On the August 25, 1949 morning, as the American coastline appeared on the horizon, I and hundreds of others went up on the deck to survey the first glimpse of America. I had read many books dealing with America and its people. I had talked to many Americans who had tried to give me some ideas about things to come. I had listened to "The Voice of America" and had formed a mental picture of America. Yet seeing a country with your own eyes is an entirely a new experience. So as our ship approached the Golden Gate Bridge, my pulse rate was quickening as I surveyed the first magnificent work of American labor. I had seen many bridges, including the bridges over the mighty Jhelum River of Punjab and the Hoogli River near Calcutta but the sight of the Golden Gate Bridge, set against the blue sky over the expansive Pacific Ocean was a stunning experience. The bridge looked like a real gateway to an heaven on earth.

The ship soon docked. The crowd got out of the ship and into a huge custom-clearance hall. There were long queues of people arranged alphabetically. My queue was one of the longest. Things were moving very slowly. As I waited in the line, I became hungry. The pangs of hunger made me uneasy. Out of nowhere, the first-class American passenger whom I had befriended during the ocean voyage, came over and asked me if everything was going well. I said no; I told him about my hunger. He vanished and sometimes later brought me a sandwich. I was so hungry that I finished it in a jiffy. The sandwich was simply delicious. When I collected my breath, I asked my friend its name. He told me that I had just eaten a hamburger. The sound of "hamburger" suggested some kind meat. That shook me. When I asked my friend to confirm my hunch that it was pork he told me that I had relished a holy cow. The sudden realization made the earth disappear from under me. The thought of a Brahmin boy eating of the holy cow tore me apart. According to the Hindu code book, I had committed the greatest sin of all. But when I observed that many Americans were tall, healthy and vigorous, a voice within me told me, "To hell with the holy men and holy cows of India."

My Indian friend who had taken a air journey and had arrived earlier, came to pick me up. We took a cab to a Powell Street hotel. I remember paying a very reasonable rent. My breakfasts consisted of corn flakes with milk, my lunches consisted of grilled cheese sandwiches, and my dinners consisted of boiled rice and beans. I still could not muster enough courage to order meat dishes. I took long walks on San Francisco's Market Street and window-shopped. I marveled at the special-price tags on items that I could not afford. I took walks on side streets where derelicts solicit "bakshish" from a Hindu. I had never obliged an Indian beggar, and I was not going to help the affluent American variety.

During these walks I met many Indians who tried to impress me with the names of their enterprises and business connections. I met Indian dancers, exporters, importers, students, teachers, and plain tourists. My first impressions of San Francisco told me that it was a very cosmopolitan city and its wealthy citizens considered it to be very cultured city. I wanted to visit its many places of culture but my reserves of cash were vanishing very fast. At that moment, I had about twenty dollars left. I had to discover a way out of my financial predicament fast. I still had about fifteen days left until the start of my fall semester at UCLA.

My rich Indian friend was busy meeting old friends, making new friends, and influencing others with his tall tales. He would come and go, leaving me to my fears, dreams, and lonely walks. One day he brought a Sikh friend who lost no time in understanding my financial plight. He advised me to go to the Sikh temple at a nearby town of Stockton. I was already a veteran of another Sikh temple of Hong Kong. So I said, "Why not?" A Greyhound bus took me to Stockton within few hours. I was again in the hands of kindhearted Sikhs. The local priest was aided in his mission by the local Indian farmers, who numbered several hundred. I was again the free-loader. I ate delicious curried dishes and rotis with relish. The kind farmers brought me ripe fruits and grapes for dessert. The temple also provided me a Spartan private room and a comfortable bed. In spite of the vegetarian food I put on pleasing weight.

The farmers who daily visited the temple were simple people. Invariably they were living there without their wives. They came to the temple to find some social contact. Their main assets were their muscles and their capacity to enjoy the simple things of life. They appeared closer to sanity than the high intellectuals. The ate heartily, worked vigorously, perspired profusely, talked loudly, laughed boisterously, and lived fully. They were people who would survive all dielectrics; they reminded me of life that should outlive any known truth, of the spirit that with God shared a common ground of reality.

The farmers listened to my small, innocent talk about my village birthplace, and its inhabitants. They lent their kind ears to the story of my dreams of coming to the States. They laughed at my misadventures and my poor relations. I listened to their tales of their adventures and miseries. I discovered about their struggles and hopes. I realized the loneliness of their lives, devoid of wives and children.

One farmer was especially kind to me. He promised to help me if the need arose while at UCLA. He bought me some toiletries. He took me to some Western movies playing at the neighborhood theatres. He confided many things to me about his past life. He was a good soul and a gentleman indeed.

On the appointed day my farmer friends took me to the Greyhound bus depot, bought me a ticket, and saw me off. My Indian friend from Jullundur had joined me. Another fellow passenger was a bearded young Sikh student. He was going to attend the University of Southern California, also in Los Angeles.

When we reached downtown Los Angeles, it was about 6 P.M. For lack of directions we took a room in a small Main Street hotel. After a poor dinner, we took a stroll. The three of us made a beautiful display; our turbaned and bearded Sikh friend looked particularly majestic. Shortly a benign-looking priest of a strange order confronted us. We felt important. He gently led us to a dark-lit hall where people with bad breath were listening to a fiery preacher. We were politely asked to be seated. We listened carefully. We did not understand anything, but who cared? When the sermon ended, the priest walked over to the preacher and had a serious conference. Later we were led to an altar with many lit candles. Then, suddenly, the fiery preacher said prayers for us. After each prayer the crowd let go an amen reeking of Scotch. We were saved for the day. The entire crowd was then led to a community kitchen where each of us was served a hot cup of soup. That was one place where I saw many a slip between the cup and the lip.

The next morning we traveled to West Los Angeles, a modest suburb, and hunted for an apartment. We rented a room with two shaky beds, in a frame building owned by an aircraft engineer who lived next door with his family. A Chinese student shared the building with us; he was renting another room and sharing the common kitchen. The same day we brought our luggage and settled down to the life of struggling students. I was rather surprised by my rich Indian friend's decision to share the room with me. He must have felt a need to conserve his supply of dollar. We bought our first groceries from a nearby store and cooked our first meal. My friend made the curried vegetables and I prepared the flat rotis. In the icebox we stored our milk, vegetables, butter. Each morning a husky iceman came and installed a new cube of ice. I remember writing to my parents about the miraculous powers of an icebox, how it preserved food and milk for more than two days.

The next day was a Monday, the day to start our fall semester. We had to go to the UCLA campus to get admitted and registered in our classes.