"It was in Illinois that I became a US citizen, some thirty years after I first stepped foot into the US." 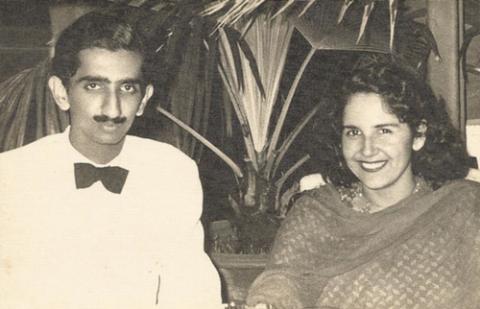 My ‘first day’ in the US is really, for me, two ‘days’: one is when I physically stepped foot first on US soil – which occurred in early 1952 when I was 25 years old and just married. However, over 30 years later, the second ‘first day’ was when I became a US citizen: that was, and remains, an equally important ‘first day’ for me.

I initially came to the U.S. as a tourist with my husband in 1952. He had always admired the Americans for their easy and affable attitudes and the belief that all things were possible, if one tried hard enough. And so did I.

Sixteen years later, in 1968, we initiated our real immigration process to the US when we moved from California to Illinois so that my husband could attend graduate school. While we had been in residing in California since 1965, I always considered that stay as temporary: I had the expectation that we would be in the US only for my children's high school years, and that we would return 'home' when they had entered college.

That changed when we arrived in the Mid-west. I realized that due to several problematic factors in our lives, we would not be able to return to the ‘old country’, except for brief vacations. What I missed most was: domestic help and a sense of community, friends, and relatives always being there.

But my salvation came in the form of work. During our time in California, I had decided to apply for my first job and subsequently found one, with a major bank in San Francisco. Working and interacting with different people helped lessened my feelings of homesickness. I created a new circle of friends and support system. It was a diverse group, which included, amongst others: Desis, Goras, Europeans and, among others, Armenians.

It was in Illinois that I became a US citizen, some thirty years after I first stepped foot into the US. I remember feeling very proud of that fact. I was still from the Sub-continent, and proud of my heritage, but citizenship seemed very special indeed, especially when I thought about the privileges, opportunities and freedom that I have enjoyed since coming to the U.S.

What I have appreciated most as an immigrant to the US are the essential freedoms that most Americans have, in their daily activities, namely: going to the supermarket, traveling out of town, moving to a new residence, buying a house or car, with virtually no difficulty. There is an ease of life in this country that I have been very lucky to experience – both mental and physical. There was a freedom of thought and belief and an exchange of ideas that took place almost every day, and no one seemed upset about it.

What I find disturbing since “9/11”, however, has been an increase of rancor, of rudeness, in both average life and on the political scene in the US. Polarization and extreme views have become more common. The lack of civility to one another is glaringly apparent (especially to me, a person from the East, who was brought up to always say -- following the well-known Indian adage --'pehleh aap, pehleh aap' -- even at the risk of ‘missing the train’).

It is a sad reality that immigrants in any country are typically in the minority. As such, immigrant newcomers are vulnerable and susceptible to hate crimes, discrimination, etc. But perhaps I should note that I consider the US to be the most progressive country in the world in protection of minority rights given the enactment of the civil rights legislation in the mid-60s. There is still a strong sense of accountability. Let’s hope it always remains so.

I am happy that my husband and I achieved our major goal: to give our children a better opportunity for a good education and the freedom to chose their own lifestyles, something that would have been more difficult had we remained in South Asia. During this journey, as an immigrant, I felt a sense of self-worth and accomplishment when I started my own professional education and working career in the US. Finally, when I became a US citizen, I felt a sense of privilege in having the chance to share in what we perceived to be the ‘American way of life’.