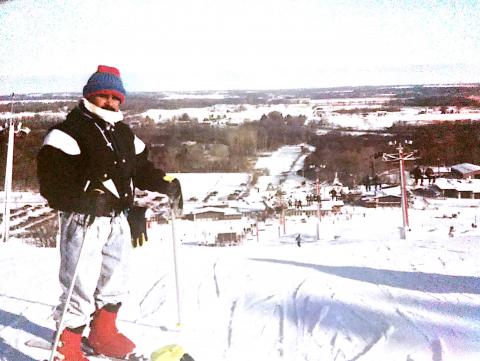 It was the fourth of July 1992, and it was beautiful weather. I came with $20 dollars in my pocket.

Talking to the people everything was a totally different pronunciation. See back home when you say twen-ee, we said the twen-tee. Masa and Masi came to pick me up and took me home, got freshed, and went to a BBQ party at Dr. Johnny’s house.

First time travelling in the plane this long 8-hour journey twice. It was Lufthansa plane I took that time and from Ahmedabad to Bombay and Bombay to Frankfurt and then to Chicago. First time I saw this many flights at one of the busiest airports in the world. So many people at the airport. At the arrival launch, so many people were waiting for their loved one’s just like airport like me. Sat in a Cadillac the first day, masa he came to pick me up in it. The ride was wonderful, so roomy car. Totally sound proof, you could not hear anything from his car. Cadillac mast chaltiti [the Cadillac ran great].

I met a ton of new people because I hardly knew anybody. Everybody asked how is your journey and how what you were doing in India? I felt jet lagged because it was a change of day to night. Had a different kind of a drink and food. I ate chicken tikka which was nice. Then I tried a burger for the first time [chuckled]. It was really good. Tried different kind of scotch and whiskey and champagne. New country, new people, new traditions… it felt amazing. I was thirty at the time. I was born in ’62 and we came here in ’92. It was the same culture, but the way everyone lived their life felt different. Now we’re here in Bartlett with a whole new life.