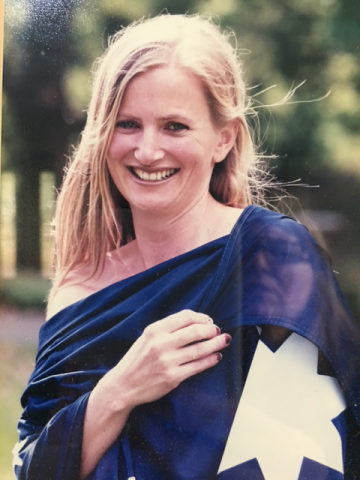 
Raelene Bushbeck moved to the United States from Australia on November 2nd, 2001. She had never thought of herself moving to America, however her husband at the time had always wanted to practice law in the United States as he was a class litigation attorney and thought that the states would be a better fit for the work he did.

Raelene agreed to make the move on the basis that they would not stay any longer than four years. That was 15 years ago! They moved to Seattle because that is where the work position was available. Her now ex-husband was working as co-counsel on a case with a law firm based in Seattle and they asked him to join them to continue working on the case from there.

She had been to the United States before, but never to Seattle. Before moving she did as much research on the city as she possibly could. Raelene looked at the school districts to figure out where the best place would be for their family to live. They ultimately chose Kirkland because it is a nice neighborhood close to the water, and because the public schools were supposed to be among the best in the state.


We arrived, it was me and my now ex-husband with four of our children. I had never been to Seattle before, it was a very first time we'd seen the city. Day one, we landed in Seattle and went to the hotel and the very first thing that we had to do was walk down to the Social Security office so that he could register for Social Security so that he could start his job a couple of days later. My first full day was the following day and we were picked up early in the morning by a realtor and taken to look at some houses that I'd been looking at online from Australia. So that was an interesting time, we drove around a lot with the children and looked at I don't even remember how many houses that day, but I found one that day that I just fell in love with. That was how the first day was spent and the thing that I noticed the most was how many American flags were flying. It was an odd time we were I found that like the neighborhoods were very quiet and cars had flags on them and houses had flags flying from them and it was just two months after 9/11 had occurred and so people were exhibiting their patriotism. We don't often fly flags in Australia so I was that was something that I really noticed. The landscape is different here. That was that was day one and I believe we were just looking at houses and taking in the area and getting a feel for where we were and where we might want to live. We had four little children in tow. My oldest daughter then was twelve and then we had a six-year-old, four-year-old and two-year-old who moved here with us. The very first days that's pretty much what we did.