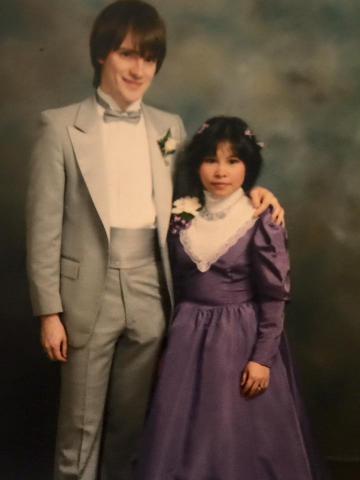 
Tevy Larsen is my aunt, who is married to my uncle Peter, who is my mom’s oldest brother. She is of Cambodian descent and came to America in the 1980s. She came to America as a refugee from Cambodia after the Cambodian Genocide that occurred in the late 1970s.

She came to America in her teenage years along with her mom and all her siblings as her father was killed in the genocide, and her first day in America was in San Francisco, California before she flew to Washington DC where she lived before moving back to California where she met my uncle, and moving to Alaska to live with him and my family.

Despite her struggles with English and working to help support her family, she persevered and now lives in Everett and is a mother to three children, my cousins Brian, Christopher and Chenda, and lives a happy life with her family and is very involved in the Mormon Church, which helped her and her family during their early times in America.

Life was pretty difficult in America. It would take me a few years to learn and adjust to it.

The first day that I came to America was in San Francisco.

We landed in the airport in San Francisco and the weather in March is very cold. We landed on March 12, 1982.

We were excited and worried because, to us America is a free country and we know it is a big country, and we were afraid that we might get lost.

We only landed in San Francisco for one night to get visas, register, and the next day we flew all the way to Virginia, and that’s where most of the Asian refugee in 1980 to were sent to in America.

The first five years in America was just nothing but a disaster because we were trying to learn, trying to make some money all at the same time, and we had ten people and we lived in a one bedroom apartment.

I was put into Wakefield High School at the age of 17 My first few years I failed class even though I took ESL classes.

We also met many groups of people, and the last group that we met was the Mormon church they were a big help to us with the government paperwork.

I was there for two years and was trying to work through my high school and was struggling badly and my family did not like Virginia, and my mom to move (their family) to Long Beach, California

I was trying my best to go to school and I worked at McDonald’s at nighttime for $3.25 an hour.

On my third year in America, I finally met my husband. He was one of the missionaries from the Mormon church, and I got married and moved up to Alaska.

We moved down to Seattle (a few years later) where his parents had jobs here, my husband finally found a job here in Seattle and I had my first baby born here in Everett, we’re doing well, even today.

I have learned a lot from living here in America and hoping that I can share my experience with my children.