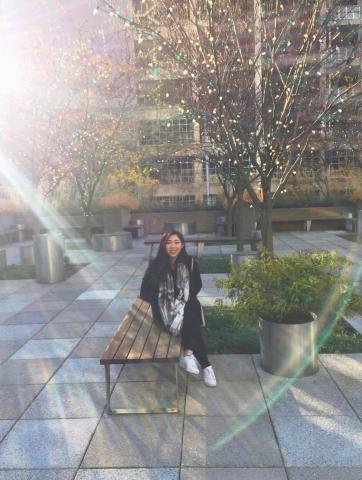 
Vivid Liu, came to the United States in September 2015 from Taipei, Taiwan. She was born in Taiwan but moved to the Philippines and eventually to Shenzhen, China for middle school and high school. She decided to pursue her undergraduate degree in the United States and now currently attends the University of Washington, Seattle where she majors in Communication.

Vivid is one of the many International students who attends the UW and here, she shares her first impressions of the states, UW and the Ave.


Hi, I’m Vivid and I am an international student studying at UW and my major is communications.

I don’t remember exactly which day I came here but it was in September 2015, that was the first time I came to the United States and I remember clearly that the air was just really nice compared to the air in Asia.I felt like it was just very clean and the people were really nice to me, even strangers on the street would just say hi to you, like greet you and ask you how you’re doing and I find that very friendly, its very different from Asia.

My first impression of UW was that it’s a really big school coming from a really small high school back home, I was really intrigued by the size of the campus and number of students and the diversity they have here. And after the first time exploring UW my favorite spot was the Suzzallo reading room it has a lot of Harry Potter vibes and it reminded me of Hogwarts.

I remember clearly that the Ave gave a really big impression on me because it was just so convenient and I was really excited to try different restaurants with my friends. There’s still times when I feel discriminated as an Asian or even as an international student but overall I feel pretty comfortable and happy being in the United States and I’m hoping to find a career here after graduation.