First Days Project
This is the story of my first day.*
INTERVIEWED BY Alexandra Brady 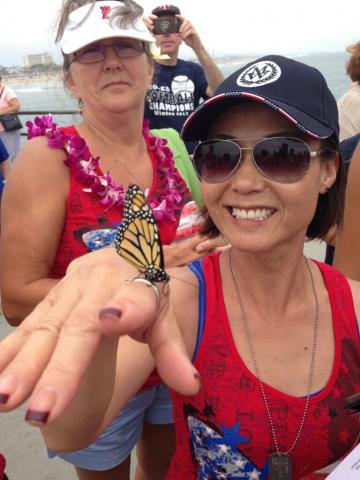 DEPARTED FROM
Seoul, Korea, Republic Of

I’m great.
Alright, I guess I should say my name. My name is [name withheld] and I am from South Korea. I’ve been in the United States for about 32 years. The date of arrival to the United States was…November of 1984. The first day was…fast. The United States, they do everything in big. I noticed actually, even though…books are bigger than where I come from. So everything was fast and big and giant. The whole thing…overwhelming…actually, comes afterwards. Probably later on…you know, month or two…or even, a year later. You realize how different it is and much you have to learn from. You know, it’s like a baby taking its first steps. And, I have a really funny story. A friend of mine, that I know briefly…she went to the supermarket for the first time in the United States. She didn’t know anything about it and she spoke very little English. And…um, she went to grocery shopping. So, she picked up a can, of processed food…and she thought it was perhaps, canned meat. Well, it turned out to be…in later years she found out, it was actually cat food. I don’t think people understand the scale of…how much you have to work hard. You know, living in the United States for 32 years, you still have that…differences. I am not native…and so because I look different, and I still speak with the pronounces or whatever now. So because of that, you’re always going to get that initial…that barrier. Is she gonna be good enough? Is she gonna be able to handle this? So you have to prove yourself. So, I am confident in myself but I still have to prove to others.

DEPARTED FROM
Seoul, Korea, Republic Of