First Days Project
My name is Abha Shukla.
"But what I can tell you is my parents actually moved back to India when I was 10 because my dad said "I was just here to study. I'm moving back. Degrees will help my country." He was very patriotic, so we all moved back." 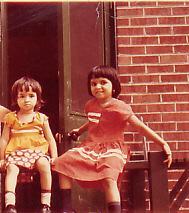 
My parents actually came to Canada first. I was 4 years old when they came to Canada. My dad was doing his Masters there. He finished his Masters and then, when I was 5, they moved to the U.S. He actually came a year before us. He finished a year of his Masters and then the second year he called us once he was kind of settled in. And then he got admitted into a PhD program at Ohio State and the whole family took a bus from Fredericton, New Brunswick, Canada to Columbus, Ohio. (Laughs) I was pretty young. I don't know I can say my first impression... When you're that young everything is a first and unique impression. Especially since my memories of life in India are very hazy because I came at four.

But what I can tell you is my parents actually moved back to India when I was 10 because my dad said "I was just here to study. I'm moving back. Degrees will help my country." He was very patriotic, so we all moved back. I went to school at one of those Catholic schools which was taught in English because I didn't know Hindi, but learned Hindi there. We were there for about four years and my dad said, "Oh, okay, well life was much better in the U.S. I've found more discrimination here." So we moved back and that memory I do have, because by that time I was fifteen... almost fifteen. I was a sophomore in high school. It was a big culture shock. When you move at the age of 10 there's not that much of a culture shock because you're ten years old and you just want somebody to play with. Yeah, the school system was a little different, but you adjust. But when you come back at fifteen then it's a big culture shock. Because by that time in those four or five years I was in India I had adjusted to an all girls school, Catholic school, very strict and then I come here to a public school where kids are making out in the hallways and teachers don't even care. (Laughs) That was a culture shock.