"One moment I was thrilled to see myself in the US, the next moment I was missing my family whom I left behind eight thousand miles away." 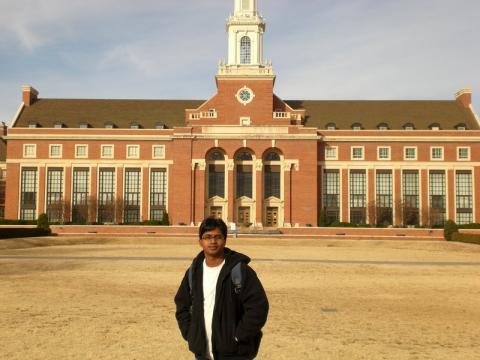 I was born and grew up in Silchar, Assam, India. After finishing my education in Assam, I moved to Mumbai and worked for 4 years in industry. During that period, I took GRE and TOEFL exams, and applied to several US universities for Ph.D. program. On April 2007, I got an acceptance letter from Oklahoma State University, Stillwater in the Ph.D. program in Chemistry. I resigned from my job on the third week of July and immediately left for New Delhi to meet my younger brother. I stayed at his place for a night and returned to Mumbai. Next day, I left for Silchar to meet my family. After spending 10 days with my family I came back to Mumbai. On August 6 2007, I left Mumbai for the US.

What mode of transportation did you take? How was your trip?
I traveled by Delta Airline from Chatrapati Shivaji International Airport, Mumbai. It was my first international trip. The trip was fantastic. On August 6, 2007 around 7 am, I arrived at JFK airport, New York City. I reached Will Rogers Airport, OKC, which was my final destination, around 9 pm. There were only few cars, airport shuttles, and small buses standing outside the airport. I stayed in a hotel near the airport to pick up my friend from the airport at 2 am who was travelling in another plane from Mumbai. Next day, we took an airport shuttle and left for Oklahoma State University, Stillwater campus.

What were your first impressions of the country?
I heard about Oklahoma when I was around 14 years old in a documentary on TV on tornadoes. The documentary showed several deadly tornadoes targeted several cities in Oklahoma. After 13 years, when I was standing on the queue for my visa interview in US consulate, Mumbai I saw the map of Oklahoma hanging on the wall of the building. It was a very exciting moment for me because I am just one step away from reaching my college. The Oklahoma State University campus was gigantic, greenery, and has many beautiful constructions. The roads were cleans, well maintained, and with flower pots placed on the sidewalks. I was amazed to see the way vehicles were following the traffic rules in the absence of traffic police; stop at STOP signs, wait for pedestrians to cross the road, and no honking!! I shared a room with my friend in the dormitory for $25 per day rent. After three days, I found an apartment off campus and moved there next day.

What did you do on your first day?
I got a campus map from the dormitory office and started locating buildings I need to go next day morning. I walked around the campus, tried to locate my department, graduate college and restaurants to take my dinner. I bought some ready-to-eat food and drinks from the vending machine from a gas station.

Where did you go? What did you eat? Where did you stay?
First, I went is the students union where I sat for an hour. Then, I went to the library, graduate college, and finally the department of chemistry. I bought some cooked noodles and few bottles of water from a gas station near the campus. Next day morning, I woke up a 6 am, took a shower, and ate my breakfast. I went to the graduate college and submitted photocopies of my transcripts and certificates and reported the chemistry department office about my arrival on campus. After finishing my lunch at student union canteen, I left the campus in search of off-campus apartments . First two days in the US and at OSU campus were filled with mixed emotions. One moment I was thrilled to see myself in the US, the next moment I was missing my family whom I left behind eight thousand miles away. I wasn't sure when I will go back to India and see them again.