"How will they treat me as a guy from Syria? Do they know about my country?" 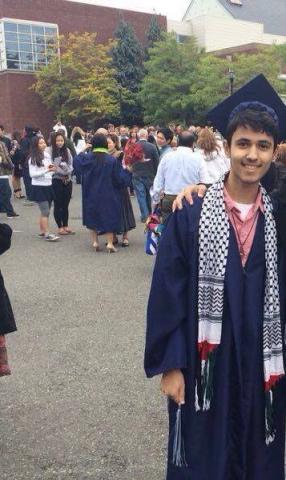 
So the first time I was trying to go to Abu Dhabi, we had a military plane crash. It was, I think, MiG-21... it showed up in the news. It hits the back wing of the plane, you know the one that's straight... it explodes in the air. And the pilot, he was very good, and he said, "There's a bird that came in the machine, we need to go back." It was 10 minutes after we flew in the air. We were just raw from the war. It was the first time I'm riding in a plane, you know! Before we got in the plane [to the United States], we heard most of these things. We heard [bomb]shells [back in Syria]. And then my dad is like, "it's air waves," you know, when the plane was shaking. And I was like, "no, it's not sound waves, there's something terrible!" I was on the window thinking there was something like smokes. But I felt a lot safer. There's no MiG-21 around your head. There's no, each half hour, there's a shell going to come up out of nowhere, you know? There's no people protesting.

My worry was only about racist things as a Syrian refugee, or a Palestinian refugee, whatever. And, as a Muslim, as I heard in the news… because we watch the news every day. Like, how will they treat me as a Muslim? How will they treat me as a guy from Syria? Do they know about my country? In Syria, you don't have to defend your religion because we don't even talk about religion. Here there's a lot of racist things. I was knowing that I will have a hard time, so I was expecting that I will see them saying on the passport, "No. You are a terrorist."

But when I came there, were five counters. People waiting very nicely. In Syria, people have a line not to have a passport or to pass. They have a line to wait for their breads [laughs]. And they're really crying. A lot of people hungry, you know? Like, oh look at that: how people have a line and are nice people. This is to tell you that refugees are not coming to bomb you, as was said in Paris.