"My first job... I only get paid $2 an hour... big difference now is I know a lot of people and I brought a lot of relatives from the Philippines." 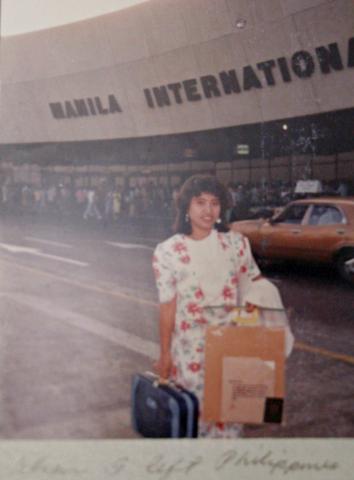 
Just a few weeks before her 22nd birthday, Ligaya Saldivar left her parents and five younger brothers in the town of Santa Ignacia, Tarlac, Philippines to pursue a better life in the United States. She traveled from Tarlac to Manila International Airport and arrived in Seattle, Washington on March 12, 1987. She lived with her aunt, uncle and cousins.

Later, Saldivar lived in a small apartment in the International District. She worked briefly at a Goodwill retail store and at a restaurant. Then, her uncle found her a different job. Based in Seattle in 1933, the Cannery Workers’ and Farm Laborers’ Union was the first union in the United States to be led by Filipinos. The Filipino men, called “Alaskeros,” worked in Alaskan salmon canneries each summer. Throughout the following years, Filipino immigrants came to Alaska to find work in the canneries. In 1989, Saldivar was among those who went to Alaska to work at the fish canneries on a three-month contract.

Saldivar, whose first name means “joy” in Tagalog, later brought her parents and her siblings, and helped them bring their own families to the United States, while raising her own two children. Currently, she has been working as a certified nursing assistant at a Seattle hospital for almost 21 years.

I guess I am 20 or 22. I traveled by myself. I picked Seattle because my relatives are here and it’s a beautiful city. I thought it’s a beautiful place and cold. And I don’t know anybody except my aunt and uncle.

My first job… That was a couple months, I applied in Goodwill. I only get paid $2 an hour. My job in Alaska is just a 3 months contract worker, that’s 7 days a week 16 hours a day, doing fish... fishing process.

Big difference now is, um, I know a lot of people and I brought a lot of relatives from Philippines including my, um, parents and I have a family now, I have my daughter and my son, and I’m working. Everybody’s working. And it’s…we lived here in Seattle since 1987 so now, I am like what? How many years I am now here, 30? 30 years. More than 30 years in Seattle. And we like this place. It’s a beautiful country.