"My first impression was that it looked like a fairy tale... I felt a sense of freedom, though there was both fear and joy in the back of my mind." 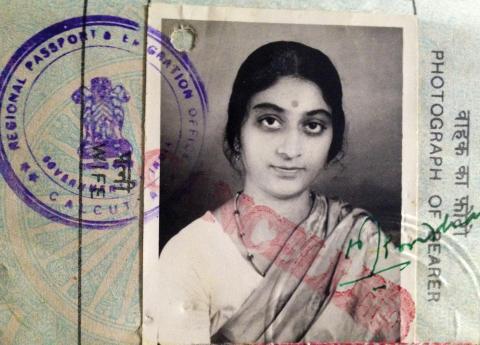 On 1 March 1970 [age 22] I arrived [along with the wife of another relative] at Boston’s Logan airport to join my husband who was already there. After my first flights and so many questions about our “saris, ”“bindis,” our names, and their meanings from the airhostesses, I was excited to see the airport covered with snow. My first impression was that it looked like a fairy tale... I felt a sense of freedom, though there was both fear and joy in the back of my mind. We had never seen so much snow. My husband and others started a snowball fight, and it was so much fun that I pretty soon forgot that I was there all alone and leaving all my friends and relatives in India behind.

I only had very light clothing [because I didn’t know] I would need a coat, boots, hat, and gloves. It was very, very cold, even in March. As one of our friends drove us home, we came to a tunnel. I thought it would be dark. Instead I saw it was as light as broad daylight! I was more surprised when the driver told us that we were now going underneath the sea. I was thrilled. Finally we reached our apartment where my husband was living, and I was again surprised that he called his friends over on the phone at 2 am. From the fridge, they brought out a big box of ice cream to celebrate. I had never seen such a big box of ice cream. Chocolate too! We all enjoyed coffee with the ice cream and wondered about what our parents and relatives in India would think about that. In the morning we went to buy some boots and coats and gloves at Boston’s Filene’s Basement. That was a big store, and I didn’t know my size. After some trials, I bought a red coat, snow boots, gloves, and hats, and I looked like a perfect “Memsaheb.” My first time on the subway that day was another thrilling experience.