"And then you come over and then suddenly it's a different environment and you don't have a single friend. I mean zero. Zilch." 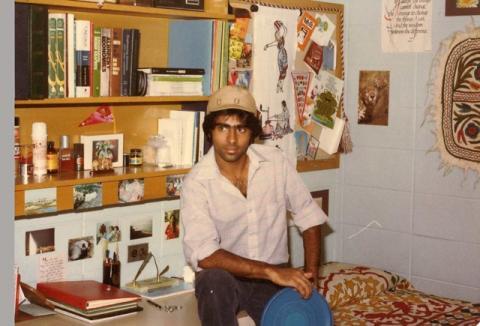 
I've lived only in Pakistan approximately eight to nine years of my life. I have lived in Hong Kong and I have lived in England, so it's not a culture shock for me at all to come here. But when I did come here the one thing was that I was... throughout my life when I was living with my parents when I was young and lived in Hong Kong and England I was very close to them. So the biggest thing was the homesickness. That was just out of this world. First I came to Arkansas. I could not get into University of Texas without taking the SATs and I did not have the time to take the SAT, so I quickly got onto getting into the University of Arkansas at Fayetteville and it was a very easy school... very easy to get grades... and I did a 4.0 GPA there and then I took a transfer to... well it wasn't a 4.0... I think it was a 3.9 something, but then I took a transfer to University of Texas. But my first day arriving was (laughs) where are all the desis? (Laughs) Because you just don't feel like you fit in. You're looking for your own kind of people. The first thing you do is... I tried to find out where am I going to stay, because I had not reserved a dorm, but I had made some plans of staying in an apartment sharing with somebody. So I did not know who my roommate was and all that.

But the first day when I arrived it was... I don't know what to say... it was... very lonely. You don't have the people that you have been growing up with. Your friends, your parents, your sister, brother. And then you come over and then suddenly it's a different environment and you don't have a single friend. I mean zero. Zilch. You're starting with a blank slate. And I create friends very easily and all that, but loneliness was the number one... if you want me to put it in one word... initially the first day was loneliness because you don't have anybody to count on, you don't know who to ask for advice and you don't know if they're going to give you the right advice. It was very interesting. It was different. I think helpless and loneliness were the two words that I would put the experience into the first day. Now... ask me about after a month? Oh my god, I was a party animal! (Laughs)