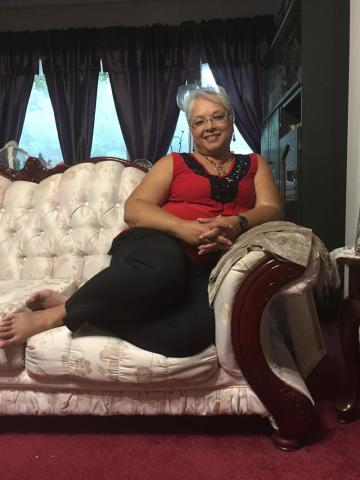 
Good evening my name is Sharda and I am originally from Guyana, South America. We came from Guyana to the United States in 1976.

Life in Guyana, from what I recall, was a carefree kind of life. Meaning that we didn't really know anything besides what we had. And what we had we thought was everything more than what other people had. We thought we were rich compared to some people. But we weren't. We were actually as poor as they were. But life, you know, you had no worries. There was little crime, from what I remember. It was the joy of being outside all the time being from a tropical country. You had… what can I say, let's see… you had the freedom, pretty much, to do whatever you want outside. Not like it is over here where you're stuck in a house most of the time. Kids over there, you had no entertainment, we had no tv. We didn't have the toys that they have here. So we had to make our own entertainment, and that was playing outside most of the time.

Alright, so why did your family come to the US and how old were you and then what were those first days like?

I was nine and a half when I left Guyana. And the reason why coming to the United States… my parents, thankfully, they foresaw that the country was not getting any better. It was just getting worse, being that it's a third world country. And they wanted a better life for themselves and a better life for us. So they decided the best way to do that was to come over here. They were given the opportunity by a friend who sent them a visitor letter, which gave them a visitor visa, and they came here. They left us in Guyana for three years. And after three years they went back for us.

From, what I can remember, the first days… or the first year in the United States was overwhelming. You're coming from a country where it was all rural. It was country area. Not too many people had cars, you walked everywhere, you took a bus. Coming to a place where there are big buildings, it's crowded, there's lots of people. Eventually you got used to it. Plus it was cold. You're coming from a tropical country to cold weather. We came in February of 1976, so it was very cold. Like I said, it was overwhelming.

I remember when we first came, the first time we went to a grocery store with my parents it was… you walk in and you're like, 'Wow!' You have all these things at the tip of your finger that you've never seen, you've never experienced, you've never tasted. And here it is, now you have an opportunity to do all of those things. And it was a gift from family friend that gave my parents the opportunity to bring us over here. So, like I said, it was strange at first, but it was the most influential, I thought, on our part. Because we went from having nothing to having something in life. And we were given a great opportunity to make something of ourselves. And, hopefully that's what we did.

So what part of the US did you move to and what was it like practicing religion there?

When we first came from Guyana we moved to Linden, New Jersey. And from Linden, New Jersey, where we lived only about a year and a half, we moved to Elizabeth, New Jersey. What was it like practicing religion? There was no religion because there was no Hindu temples or there were no mandirs around in New Jersey. Back in those days there weren't too many Guyanese that lived within the community where we were growing up in. So what we did was we became Presbytarian. Reason being my teacher at the time was the pastor's wife and she took us under their wings, so to speak, being that we're from a different country and not too many foreigners were living in that area. So they took us under their wings and they came over and asked my parents if it would be okay for myself and my two brothers to attend church. And, of course, my parents felt, as the pastor and his wife felt, that we needed some kind of religion in our life. And they were pretty clear that once, or if, Hindu temples became available to us that we were more than welcome to go back and practice our religion. It wasn't that they were tryiing to convert us or anything like that. It was just that they wanted us, as young kids, to have some kind of religion in our lives.

Like I said, there weren't too many other Guyanese kids in Linden. When we lived in Linden there wasn't any. So you had to deal with whatever the society had at the time, which was mostly Polish people that we lived around or white folks. There was a mixed community, but mainly white and Polish. When we moved to Elizabeth there was only a handful of Guyanese people, maybe there was like two or three families that lived within the area. So it was very difficult for us to grow up with Guyanese influence in our life, because there wasn't any. Most of the Guyanese, when they came from Guyana, they migrated from Guyana to New York. So if you wanted to be in a Guyanese community you had to go over there. So most of our contact with Guyanese were just relatives that we would go and visit in New York.

Is there anything else you would like to add?

No, I think we covered pretty much everything. But I just want to say thank you for giving me the opportunity to share my side and my experience of coming to America, so to speak, from Guyana, being a third world country that not too many people in America know where it is, or know what it's about.