First Days Project
My name is Armin Kakas.
"Seven years later I migrated to the US by myself, promising never to experience the geopolitical and economic hardships that my parents had to live through." 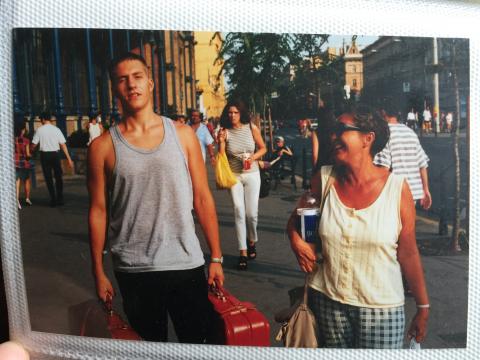 The included picture was taken from a photo album my mother created a few years before she passed away. It was taken in Budapest, Hungary, shortly before I got on a train to Italy, where my cousin joined me on a flight to the US. I was 17 at the time, and having left my parents in Hungary, I was very fortunate to spend a couple of years in Leavenworth, Kansas with a wonderful American host family whom I consider my own still to this day.

I was born in Serbia, and my family and I had migrated to Hungary in 1991 at the onset of the Yugoslav Wars to largely escape the economic malaise that was to follow. Seven years later I migrated to the US by myself, promising never to experience the geopolitical and economic hardships that my parents had to live through.

Admittedly, my first day in the US was less than glamorous (it was in Leavenworth, KS, after all!). However, the meager aspects of small-town Kansas were more than negated by a loving American family who treated me like their own son, and who enabled me with the platform to lead a life more fulfilling and successful than my parents could dream of.

Most (less globally exposed) foreigners still think of the US as the ultimate (free and painless) panacea for the tough socio-economic issues that most migrants from less developed countries deal with. It certainly is not... But it is still a place where hard work, persistence and a bit of ingenuity ensures a fruitful and meaningful life for those that desire it.