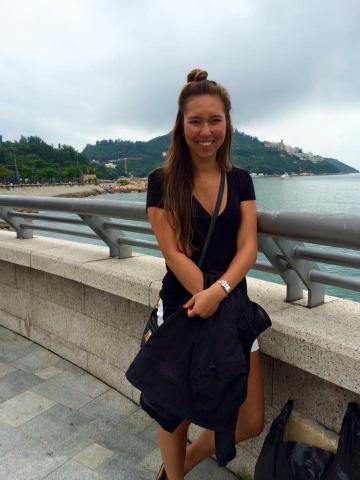 
Mary Hubburd was born and partially raised in the Philippines. At around 7 years old her family moved to Vancouver, Canada. There, they went to school and had dual citizenship. When Mary met her boyfriend, a real estate developer, they decided to move to the United States, a place Mary had only been once before when she was a little girl.

I find Mary’s story really interesting because when she lived in the Philippines, she had servants and household help. Each one of her and her 6 brothers and sisters had their own personal nanny. She grew up thinking this was completely normal. after talking to her, I came to realize that the way of living in the Philippines is polar opposite to the United States.


I grew up in Manilla Philippines a suburb called Forbes Park. I have 7 brothers and sisters, in a busy household. It’s definitely a different lifestyle than we live in the US now. I moved to Vancouver Canada when I was 7 with my entire family. Life in Canada is definitely more similar to life in the US and completely different than life in the Philippines. I came (to the U.S.) when I was about 20. The man I’m still with needed job growth, so we went across the border, and started a new life here in Seattle. I definitely think I want to stay here, I’d say the education for future kids is definitely better than in Philippines and Canada, and a lot more opportunity for a future family. I do, my dad is living there (Philippines)now, he moved back once my brothers and sisters and I grew up pretty much. He still living there and he’s quite elderly, so we go to visit him about every year. We all take turns rotating going to see him. (Talking about first day in Vancouver) remember getting off the plane and it being very cold. The Philippines is so humid and hot all the time, and I remember thinking, where am I it’s freezing. The Vancouver is very bustling, traffic was calmer, it was definitely scary but it was exciting.

We had been here once when I was about 5, we all took a trip from the Philippines to Disneyland, my father planned this trip. We all took off to Disney, it was my first time out of an Asian country, I had been around Asia quite a bit. That trip was a very different trip for me.

No that one was definitely an easier move, the lifestyles are a lot more similar. The hardest part was getting paper work and citizenships. Fortunately, when I moved 7 or 8 years ago it was a lot easier to get citizenships, so we were pretty lucky. Yeah the move was not too difficult.