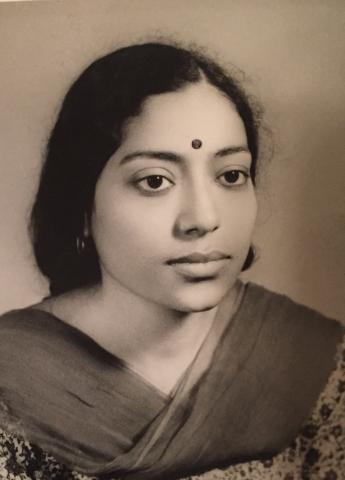 It was the month of July and the year was 1979. I had gotten married some months back, but was in the middle of a house job so had decided to join my spouse after completing. He asked if he needed to come get me, but I said, I was OK to travel alone and all he needed to send was the air ticket. I had never sat in an airplane but looked forward to the adventure. Draped in a saree, with a woolen coat (my husband said, come with a coat as it can get cold in NY) and with $20 in my pocket (that was the maximum foreign currency allowed to leave India with in those days) I was bid goodbye by my father and siblings, my mom stayed back at home. They were nervous about my maiden journey, but I was confident in my naïveté!

The flight from Mumbai to Kuwait and then to Heathrow went fine. But as we left Heathrow, turbulence hit and I was hit by wave after wave of air sickness. My attempts at ringing the bell for air hostess to get rid of the barf bags only seemed to make them unhappy! I ended up using $1 to get headphones on the plane to see the inflight movie (was not free in those days.) I landed on JFK, 8 hours late, with a horrible headache and still feeling sick to my stomach. Had missed the connecting flight to Upstate NY, by now I had used 50 cents on a call to my husband and a dollar was needed to rescue my luggage from an eager porter, that I had assumed a welcoming encounter. After being directed to a rebooting counter, was told they had one last seat to my destination. The joy of this was quickly replaced with worry as the alternate flight was to be from LaGuardia airport and I was to get a cab to get there. I had only $17.50 and was told cab ride could be $20.00 or so. Oops! There was a young Indian guy who had come on the same flight and we had gotten the alternate flight at the same time and here I was wondering what next at the taxi line. He walked up having heard my predicament and offered to share the ride in exchange of a drop off at his hospital (he happened to be a young house staff) by my husband. I accepted his offer following my instincts (thank God for simpler times then). On arrival at my destination, I find that my husband is on call that night, was just allowed time enough to pick me up at the airport, and on a borrowed ride from a kindly Indian couple that he had befriended had come to pick me up. Now they had to drop off this other person as well, who had let me ride the cab to La Guardia.

My husband intended for me to stay with this couple rather than be alone in our apartment. But still feeling queasy, I begged to be dropped off at the apartment that was to be our home. He helps me get the luggage in, and says he has to report back at the hospital. The apartment is lit by one overhead light in the hall, as he had just moved in and had not had time to settle in. I find myself alone with furniture that he had just got from another doctor that was moving out and had just put it any which way in the two bedroom apartment! Now I was fully awake and it was the middle of the night! With nothing better to do, I unpacked and one by one rearranged all the furniture in the entire apartment. In the morning, I finally dozed off. He arrived and opened the apartment door and immediately closed the door believing he had entered the wrong house! He did a retake and when confirmed that indeed it was our place, came back. And that is what happened in my first 24 hours in this country!

The other things I recall from those first days:
There was no access to calling my family on the phone beyond making a “trunk call” to my next door neighbor to let my parents know I had reached. Those calls were expensive and transmission of sound poor. We had to resort to letters via Aerograms and I promptly wrote one to my parents. My husband had told me on his way out to the hospital that the mail box was at the end of the street. I walked out looking for that familiar red pillar of a mail box that we had in India. Lob and behold there was no such thing at the end of the road no matter which side I looked. All I saw was this strange blue squarish box on four legs, with no openings to put anything in. I walked around it once and then twice more, knowing that this is what my husband meant, but where do you drop the letter. All I saw was a handle and even you open it you saw the back of the metal wall, but no slot anywhere! It was quite the dilemma but persistence paid off and I finally got it, that putting the letter on the inside of the flipped handle on closing, let the letter slip in. I had to confirm that before walking away! Whew! It has been a wonderful journey of discovering life in America and I have loved it. Had never dreamed of settling abroad growing up, but never I cannot see it any other way and am proud to be an American citizen, who has spent 4 decades of her life here.