"If I could share any piece of learning that I had from my family’s experience it would be the significance of finding connection, regardless of what community or ethnic group you find connection in, finding connection with other immigrant people." 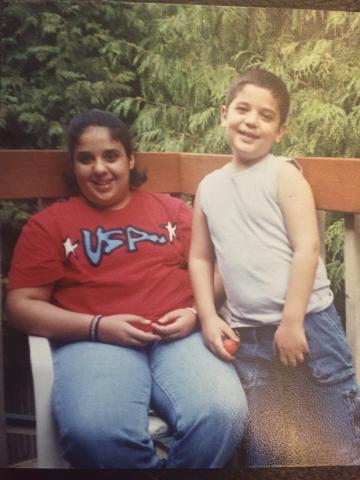 
When I was five years old, my family of five — soon to be six, as my mother was in her last trimester of pregnancy — emigrated from the Middle East to the state of Washington, where my father had come to college as a teenager. I had been born in the United States purposefully on my parents’ part so that I would be a citizen, but my older sister was not as lucky.

She was born with one leg shorter than the other, and needed numerous operations to lengthen the bone in her short leg. She was nine when my family immigrated, but circumstance forced her to grow up far faster than any child should. In the United States, she was a disabled, undocumented immigrant girl of color who was still learning English. Despite being marginalized in several ways, she quickly began to excel in school and eventually went on to attend Western Washington University on a full scholarship ride.

I was very young, but I still remember her main concern when our family immigrated was to make sure the rest of us were doing well, especially our pregnant mother. She would play with and entertain our 1-year-old sister and me, make us meals so our mother could rest, and always check in to make sure we were getting accustomed to our new lives without too much struggle. Today, she is an elementary school teacher in West Seattle, where she deals mostly with Arab and other immigrant students and their families. I visited her recently on a Sunday morning, where she made me lunch and didn’t even let me wash my own dish before sitting down to tell me about our family’s immigration from her perspective.


My name is Aysha Kloub. My family moved to the U.S. from the city of Amman, Jordan to Vancouver, Washington in the year 2001, during the summer time.

I needed a lot of operations because I was born with an underdeveloped right leg, and one of my legs was shorter than the other one, and the bone lengthening procedures I needed were really becoming a lot more advanced in the United States. And also just the lack of economic opportunity in Jordan was really starting to take a toll on our family.

When we actually arrived I think I started to have little transformative moments in my perception of the reality around me: starting to have those feelings of not belonging, dressing differently than my peers, feeling like I didn’t really know what I was doing. And I wasn’t comfortable for the first time in an academic setting, particularly in school really threw me off because I had always loved school when we lived in Jordan, and I felt like it was the one thing I was really competent at as a child. Like I wasn’t involved in a lot of sports or after school activities because of health issues, so school was my thing. And then in the first few months here, I totally had no idea what I was doing in school. And it was very hard to build friendships with people in my first few months in school because I was very dependent on my peers to get through assignments, to get through instructions in school, and I often felt more so like a burden to my classmates than a genuine friend or person they wanted to be around.

If I could share any piece of learning that I had from my family’s experience it would be the significance of finding connection, regardless of what community or ethnic group you find connection in, finding connection with other immigrant people. It’s important to maintain some of those small traditions that make you feel at home.