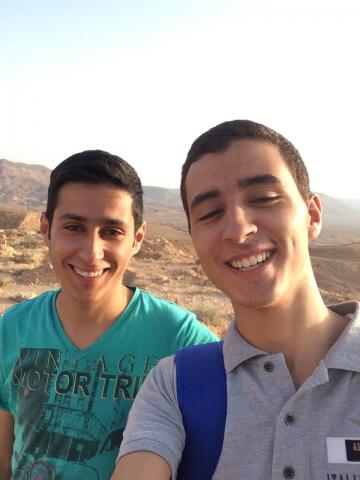 
Bilal Sijok first moved to the United States from Tripoli, Libya as a high school exchange student through the Kennedy-Luger Youth Exchange and Study program. His first day was spent in Portland, Oregon before arriving in Camas, Washington where he would attend his senior year of high school.

Before his departure from Tripoli, Sijok spent the week in a village about 100 miles outside the capital to spend time with extended family and because of militia conflict in Tripoli. Because there was no available airport in Libya, Sijok drove to Tunisia with his farther to begin the multi-flight journey to the United States. Sijok (right) is pictured above with his older brother on one of his last days in Libya.


“My name is Bilal Sijok. I am from Libya, which is a country in North Africa. I am from Tripoli, to be specific, the capital. I came to the United States as an exchange student and the program that I came through had placed me in Camas, Washington, which is where I live now four years later. I was honestly in shock for a lot of it – the fact that I am in the United States. The airport scene is always exciting to me just because I see people from all over the world trying to connect or to find someone. And then my host family, not host, but the ones that came to the airport for me. There was a rush for me – being in this country where I don’t know anyone. And there is someone actually expecting me to be here and they have balloons that had my name. It felt – I don’t know what they feeling is – but it felt cool and weird. And, ‘Wow, I don’t know anything about these people but they probably know me already.’ It was a little bit overwhelming, but the one thing I learned that night was that Americans are super, super friendly and accepting of people. They talked to me like I was a part of their family – like we had known each other a long time. They were so accepting about anything and everything, so it was really cool.”