"So if you’re open-minded, you can conquer all the fears. You can adjust." 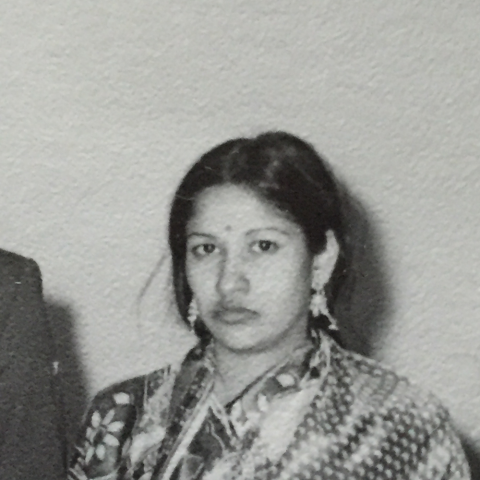 
I landed at JFK, New York. It was in the late evening and I came from Bombay. It was a very busy, crowded airport there and here I didn’t see that many people and my first impression was, “Where did everybody go?” * laughs *

And of course my husband and my sister-in-law came to pick me up and we took the turnpike and I95 and came home to Pennsylvania and there was nobody but the cars everywhere. That’s all I saw. And I was wondering, “Do people ever walk here?” or “Am I going to see anybody or not?” * laughs *

It’s bittersweet feeling because I was leaving my parents. And my family at the same I was nervous and excited too because I was going to see my husband after six months and start a new life.

I just meant getting used to the lifestyle here and comparing a lot of things from India and here. So the first year was kind of lonely. At the same thing, exciting too because we used to go places every weekend. My husband would take me to different, different new places. And getting used to the climate. It was in September, so a little chilly for me coming from India. And the places were beautiful. In a few weeks, we went to DC, New York City…that was quite exciting. And Philadelphia.

To get used to American food was a little difficult because I’m a vegetarian. But first time I had French fries and pizza and I loved it. Both of them. * laughs*

Traveling, tasting new foods, and getting used to everything, I believe. Going to New York City…that was quite exciting and it was different. And on the highways I used to love all these big trucks transporting cars at the same time. Nine or ten of them. That was quite a different sight. I loved to going New York City. My husband was quite fond of New York too. Visiting Statue of Liberty, Times Square…

I didn’t know that many American people here because my husband's two sisters were here so. But our neighbors, Americans, were very nice and we became friends right away. And a little barrier was with the language. Even though I spoke, read, and wrote English…but getting used to the accents, American accents and they were getting used to my Indian accent. It was a little challenging. We managed. * laughs *

What advice would you give to someone immigrating to the United States?

You know, be open-minded. If you’re open-minded, you get interested right away and that’s what I did I think. In India, I was born and brought up in a small town and to get married I came to Bombay and I stayed in Bombay only for six months. So it was quite a transition from a small town to a big city to a different country, but I was quite open-minded and I wanted to learn and I liked different cultures. Even when we travel now, I like to mix with people. I’m a people person. So if you’re open-minded, you can conquer all the fears. You can adjust. I always wanted to travel. Learn new things. It was fun.

So far this is what I remember. I mean, there are so many stories. There are memories, first memories.