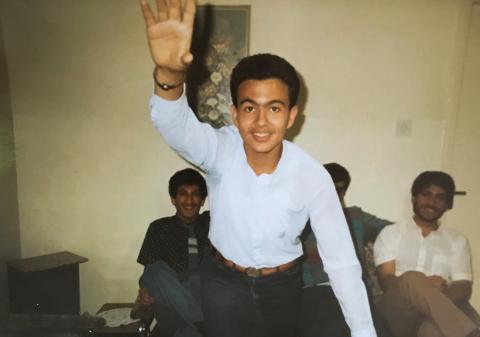 
Bishara Kharoufeh, 50, was born in Palestine during the 1967 war between the Arabs and the Israelis. Only 40 days after giving birth to him, his mother escaped with Bishara through the Jordan River to Jordan and reunited with his father who worked in Kuwait. Bishara stayed in Kuwait through high school, but as a foreigner was not allowed to stay any further unless he had a work permit or entered a university there. Since his parents were not engineers or doctors, he could not enter their universities.

He applied to continue his education in the United States and England, but opted for the U.S. because it was less money. Bishara chose to attend the University of Southwest Louisiana, which has since been renamed to the University of Louisiana at Lafayette. His arrival to the US was difficult.

“This was Louisiana in the ‘80s, Iran contra just finished, and foreigners were not accepted,” Bishara said. “I came in with black hair and a mustache and foreign language.”

He entered the university with the goal of attaining a chemical engineering degree, so that he could one day go back to his family in Kuwait and work in the oil industry. However, due to the Gulf War, his family fled back to Palestine and his plan needed to change. He decided to major in computer science instead, from which he was able to get a full scholarship for his master’s degree as well. After working for a tech startup in Los Angeles, he eventually made his way to Microsoft in Seattle where he continues to work and live with his family today.


Parents drove me to the airport, dropped me at the gate. All I knew is the end destination is Lafayette, Louisiana, but I wasn’t thinking how long the trip would take, or what is the stops, or anything. I was just going to school.

The first stop was Cairo and there’s a three hour stop in Cairo. Got to JFK 9.5 hours later, just to find out that my connecting flight to Lafayette actually departs out of La Guardia which is a separate airport in New York and I had to figure out how to move from one to the other. Broken English and all, figured out to ask questions. Got on the flight to Lafayette knowing – or assuming – that one of my friends was going to meet me at the airport to pick me up.

Got to Lafayette, got my bags and no friend awaiting. This is August in Louisiana. It was raining and humid. And hot. And I didn’t expect it. Used a payphone and called him and he said that their car broke down and he can’t come. He gave me an address and said get in a taxi and come over. Got in the taxi and I gave him the address, and the taxi driver started, ya know, making comments about my English and he doesn’t know where the place is but he’s going to look for it. We drive for about an hour and then he says “I can’t find it.”

So we stop at a gas station and I get some more coin and I call my friend again. I give the phone to the taxi driver to talk to him directly. He figures it out, where we are, and drops me there. At that time it’s 9:30 pm, I think 24 or 30 hours later from departure. I get in, I think I had a glass of water and I crashed. And the second day all I wanted to do was go home.

Nervous trip. Hard trip. Exhausting trip. First trip alone without family. My first trip to the US was not an easy path, but I thank god for doing it.