"I had studied and learned so much about the United States while growing up and during my student years I studied American Literature." 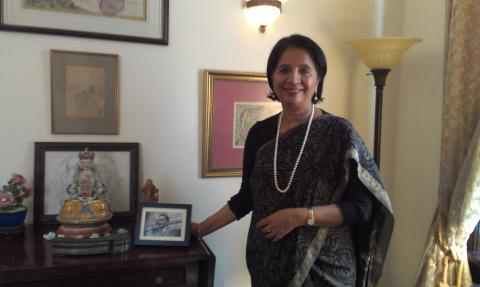 
When I came to the United States for the first time in my life in October of 1983 and I came here from a posting in Sri Lanka. It was very soon after the ethnic riots of July of 1983 in Sri Lanka. It was a horrific, horrendous experience through which I had lived for a few weeks. And then I had taken some time off to join my husband who was doing his MPA at the Kennedy School at Harvard and that's how I came with my six year old son at that time to Boston. We landed, I remember, at Logan Airport one October evening. It was a nice evening, it was great weather and welcoming fall environment. You know, autumn in Boston. I remember being struck by the size and the proportions of everything that I saw in Boston when I landed. I had never experienced the United States before so just driving out from Logan Airport to Cambridge where Harvard, as you know, is situated to our student housing. I had never seen, in fact, a tunnel. And Logan has a lot of tunnels leading from Logan into the city. So just experiencing the infrastructure, the architecture that looked so different, and then coming into Cambridge, into Harvard Square, and then going to Peabody Terrace where we had our student housing. Just the novelty of it all was something that struck me.

I had looked forward to this visit. I had studied and learned so much about the United States while growing up and during my student years I studied American Literature. And, of course, we had grown up watching American movies and reading American fiction, for children that is, and also the comic books. So I didn't have a cultural shock, definitely, when I came here. And I spoke the language, of course, perfectly and understood 'American' as it's spoken. So I didn't feel that this was a foreign place in that sense of the word. I think it was a welcoming environment and I adjusted to it very quickly and that was my introduction to the United States.

I still remember the host family that we had. Every student at Harvard had a host family. The Vodels. They epitomized the warm, generous American for us. And I remember our first Thanksgiving dinner at their place. It was my first experience of American Thanksgiving customs and the way they celebrated it. So I remember that very, very clearly also. They had a house in Watertown, Massachusetts. In Watertown, just outside Boston, and they were an All American family. And we've kept in touch with them through the years. In fact, more than thirty years now.

So that really was my first experience of the United States.