"And every time we would come to visit his sister, we would buy all the groceries from New York, which was once in three months..." 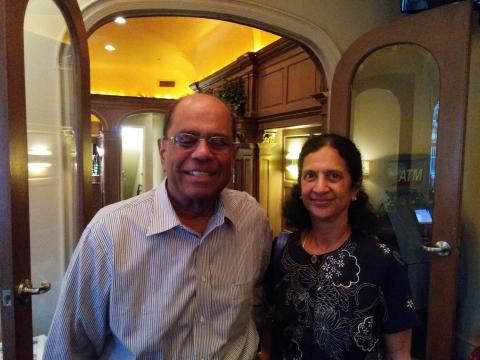 
Chitra Chandran shares the story of her first day in America. She'll never let her husband, Dr. Rajan Chandran, forget that after she arrived, he went to watch the US Open without her even though tennis was her favorite sport. Meanwhile, Dr. Chandran shares the story of how his friend's two-year-old daughter clung onto him for over a week after she returned to the United States.


Chitra: You know ours was an arranged marriage. After our marriage, I got my visa within three months and I was around twenty-five years old at the time. So then I came over and uh--(laughs) Chandran and his sister, my brother-in-law, they all came to pick me up. And uh, you know (laughs)

Rajan: (laughs) Yes, and you know, my wife never lets me forget it because on the very first day I had a friend of mine who was a very big tennis enthusiast and uh, so he, I, and my brother-in-law, you know, left all the ladies and went off straight to Forest Hills to watch the US Open and they never let us forget it (laughs).

Chitra: And tennis was my favorite sport also. And I’ve been—I was following all the big players and my favorite player was playing that day (laughs). So I was really mad at him for just leaving me and—

Rajan: I believe that.

Chitra: Yeah. And then we went to Syracuse and that was a different experience because it was very cold there from coming from Chennai….a very hot place directly to a very cold place. The first winter was very hard but then I got used to it. We were there for a couple of years before coming to Philadelphia.

And things were so different in those days. We didn’t have any Indian store or we had to go to a Chinese store to get some lentils and things like that. And every time we would come to visit his sister, we would buy all the groceries from New York, which was once in three months or whatever…so. Things were so different, but it was a good experience coming here and learning different things and coming to a new country.

And one thing is I went back to India after five years (laughs). That was a long time! And not seeing your family…you know. That was hard…the first time.

Rajan: One other memorable thing that happened in my life was I saw a man landing on the moon---um, Neil Armstrong---at New York’s Kennedy Airport. And that happened in an interesting way because one of my colleagues, uh he had a daughter and his wife was a doctor. And so she used to be a resident and—so they had this rotation where they used to work godly hour. And so she couldn’t manage the baby and he was doing his PhD so he couldn’t afford the time to take care of the baby. So they sent the baby home to their mother in India and so when---she left when she was probably about six months old and she returned when she was two years old. And that was the day Neil Armstrong landed on the moon. And they had a huge television screen at JFK. And when the baby landed, the most funny thing was that she refused to go to her mother or her father. And she saw me and she just made a beeline for me and wouldn’t leave me! So I had to actually stay in their house for a few days until the parents got acclimatized.

Rajan: --Babysit her for almost a week!