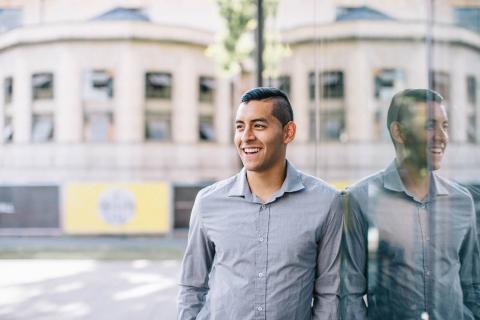 
Paolo Duarte immigrated with his family from Lima, Peru when he was 12 years old. He flew into Portland, Oregon and relocated to Longview, Washington in the first days he was in America. His dad had already been living in Washington for a year before Paolo immigrated with his mom and sister. Paolo grew up with a love of soccer in Peru, but was also experiencing some rough times before he left. Paolo currently lives in Seattle and speaks fluent English with a very slight accent. He came to the US without knowing any English. He is only 21 and he made a very hard and fast transition work for him. Paolo's First Days interview documents his first day driving around in America and his first day at school.


I just remember the drive on the freeway because I’ve never seen a freeway before, because in Peru we have express roadways, kind of like a freeway, but they were a lot smaller. And there was like really pretty… and I was like “wow this is nice” and the air was really clean and crisp and the sky was super clean and crisp and Lima is especially really polluted so, coming here was like “this is nice” and then we went to my uncle’s house. So they live like in the middle of nowhere in here and they just have a bunch of animals, like a ranch, and it’s just like… I showed up and I was like “what the hell is this”. So you know my cousins all come lined up to say hi to us and stuff and they’re pretty much straying like little puppies like “hi” “okay” and they go and sit and the next one “hi”, sit, and so at first I thought America was all like that and I’m like “there’s no way this how it’s gonna be”.

I remember when we moved to our apartments, our apartment was on the same street as my middle school and I remember I freaked out. I was like “No, I’m not going to school”... “Like no, like I don’t know English I don’t know how I’m going to communicate… how am I going to get through? how am I going to pass my classes? how am I going to learn all of this stuff?” And I truly believed I wouldn’t even be able to learn the language. It’s so hard. And I remember the first day of school, I didn’t know how they went about lunch here. If you’re not cool you can’t sit at this table, if you’re kind of a loser you sit at that table, and if you’re hispanic you sit at this table. And it was one of the times where I remember vividly, I was like “I hate this”. And at the time I was like “Wow, this is how it’s gonna be… this sucks”. I experienced bullying, I didn’t, not first hand, but I saw it. I saw it first hand. They took his lunch and then just like flipped it over and threw it away. Coming from Peru, it was a rough time for me cause that was when I was very violent, I was involved in deep stuff, like really, like in trouble a lot of trouble, so seeing that pissed me off. and I wanted to do something about it. I sat down and then I see this kid just completely bully the crap out of this kid. That was a crazy first day of school for me.