First Days Project
My name is Latika Mangrulkar.
"Two continents away from home, across many seas, as the plane circled New York I began to feel apprehensive, suddenly fear overcame me." 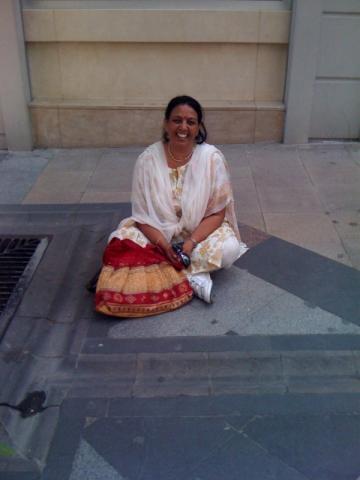 I walked into the plane that rainy Monsoon night, at 22 full of youthful confidence, a pioneering spirit ready to conquer new frontiers. The year was 1967. A graduate fellowship to study American literature had opened the gates to their first South Asian woman at this mid-western university.

Wearing the traditional sari, carrying a bag stuffed with notes I would never read again, a large brown envelope dangling in one hand, my mind proclaimed: “Watch out world, here I come.”

Two continents away from home, across many seas, as the plane circled New York I began to feel apprehensive, suddenly fear overcame me. That tan packet was the Scarlet Letter of the twentieth century, X-ray pictures, reminder that germs from the third world must be kept away at any cost.

I clutched mine so tightly, there were marks on it. If I lost it entry would be denied USIS officials had warned. I stood in line, nervous, anxious when I heard a booming voice “Miss, turn around.”

I did not realize it was me being spoken to. I looked around.

Daughter of an army veteran, a child of an autocratic father I knew how to follow orders. I turned. For what seemed like an eternity, in reality no more than a few seconds. Then I heard: “Now you can turn around.”

Half a dozen white men, immigration officers, their eyes ready to pop were glaring at the thick braid that flowed down to my knees. As I faced them there was a loud round of applause.

My confounded expression was heralded with laughter, till a middle aged fellow gently said “We were just admiring your hair.”

Suddenly I found myself smiling back, feeling warmly welcomed into this strange New World.