"I also didn’t realize how much I’d miss my native land, my parents, my friends, my music, as I carved out a life so far away." 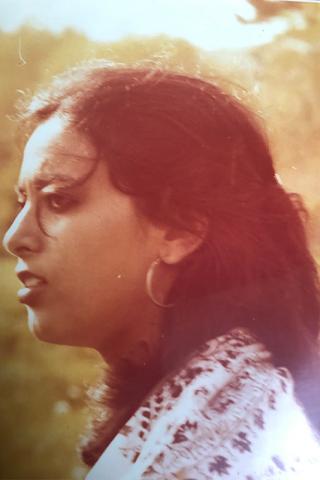 I had been entrusted to the company of an older namesake from Lahore who was returning to complete her MA in Architecture at MIT, and because I was a young, single woman, my parents hadn’t wanted me to travel alone for my first truly independent trip away from home. I had just won a full tuition scholarship to Tufts University to study for my PhD in English Lit and my middle class dad had saved up to give me enough money for my other expenses for 1 year- after which I knew I had to support myself.

I was excited and also a little apprehensive to begin what would become my own independent life away from the sheltered life of a girl from a middle class urban home that I had led thus far.

We were met at the airport by my namesake Fauzia’s desi friends at MIT—all young men studying to be engineers- amongst whom was the son of a friend of my parents that I’d met the year before in Africa and who had helped me with my admission process to Tufts under the impression I’d be his fiancé. Yes— I had given him that impression but when I saw him with a ring in his hands for me, I realized I had no interest in him or any desire to be hitched up right away to anyone.

So, I broke his heart.

After being driven down Storrow Drive we arrived at the MIT campus laid out alongside the beautiful Charles River, and I spent that first night at my friend’s apartment on campus where I met the man who later became my husband- Babar Ali Khan from Karachi, studying for his PHD in Physics at MIT. I’d never have met him in Pakistan because we were from different cities and backgrounds.

But that first night I looked forward to embarking on a grad school experience away from the constraints back home and felt deliriously happy— not yet aware of the many challenges of discrimination I’d face or the many successes I’d enjoy as I became a hyphenated American in the decades to come, settled into my career as a university professor and scholar, and became a mother. I also didn’t realize how much I’d miss my native land, my parents, my friends, my music, as I carved out a life so far away. And it wasn’t until 9/11 that I turned into a “Muslim woman” for public consumption in a way I’d never imagined I’d be.

But that first day in America looking forward excitedly to finding my own housing at Tufts soon, I was young and naive enough to believe that here, I was going to be able carve out a life for myself in which I was totally, blissfully “free”—