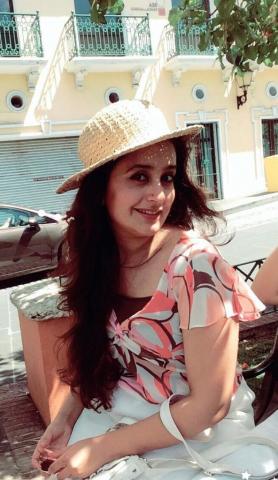 Okay, perfect. So, here are few questions about your first days. I'll just start with the basic one. Who met you when you arrive to the US? Anyone in particular at the airport who came to pick you up? How did you get to the place where you wanted to go?

Our coordinator picked us up. We were in a group. The few things I remember that I couldn't find my bags [luggage]. I was among two other people who lost their bags during a flight. We were trying as much as possible to get ahold of information or something [about bags] to get back but they couldn't tell us about the bags, a guy was waiting for us right before the entrance or the exit. He was our coordinator. His name was Alex. So we saw him I saw him first. Actually that's what I remember. Because Aster was trying to you know, move past him and I was like Aster, Aster. He has our names. It was kind of nice, but weird for me. I was nervous. Confused. So he picked us up and he brought us back to dorms.

What were your first impressions of the country? Like any surprises? Shocks?

What did you expect of the US before? Like, I'm sure you had some ideas of the U.S. how it would look and when you actually came to like a small-town Bethlehem, Pennsylvania. What was that difference in your mind? Was there anything different that you found?

It was definitely different. I mean, okay, if I say like I had the New York and California perspective, in my mind, still, I was not expecting what I saw. The very first day at least I was expecting city vibe, which I couldn't find there. And it was not even city vibe. I got here, why did I chose to come to America. I had different thoughts. So yes, it was very much different than what I was expecting.

Not very much. We just got to the rooms, settled down, opened our bags, freshen up, took some rest, and then the coordinator took us all to campus, we had some kind of lunch or something. It was American sandwiches, tasteless. I was like, what you're gonna eat.

Do you know what kind of a sandwich?

It was turkey sandwich. Okay, so, yeah, a little bit of snacks and all these things. So he asked us to pick up some food, if you want to take back to our rooms, it will feel hungry afterwards. So yes, I guess people pick up some of the fruits and juices. And then he introduced us to a few other international students as well as a few people because obviously it was not the [start of] semester. people who are home and most of the students were home as well. So we only got a chance to meet with few international students and that's all and then we came back to rooms. And guess that's how I remember.

Okay, and where did you go any place in particular that you went to any store any other place that you remember?

I don't remember the very first day but probably next day or coming week. first ever store we went to was Dollar Tree. Different for me, like everything is for $1 Like really? Okay, so interesting. So we got so much stuff. But yes, important things we needed. And then we went to Walmart. And it was like I that was the very first time I saw that, that much big store. I never I've never seen it, even though I lived in, like around Islamabad but I never got a chance to physically go to such stores in Pakistan. But obviously Walmart is a very big store as compared to what we have in Pakistan. But yes, it was very different for me and you get everything in one store. You don't have really have to go and move places and you know, go outside of that store. And you find everything. goodwill was another store. So I remember those people, international students from Tunisia, they took us to those stores and help us find some stuff you needed because obviously me Aster and Shah Jehan lost our bag. So we really needed some stuff to survive for a few days.

Is there anything in particular that you remember that stuck with you from your first days? Anything?

Um, yeah, I mean, I felt like I was very, as I explained, I felt very numb. When I got here. It took me some time to understand, like, my existence and people around me and that's why still Aster and Habiba remember me as of the shy person they met, and I was very hesitant or something, but actually, I was not I was like, very much confused. And I was not able to comprehend and understand so many things around me. And those are the things like even though if I remember like now, I'm way, way different than what I was. But still, if I look back, I still feel that numbness in me.