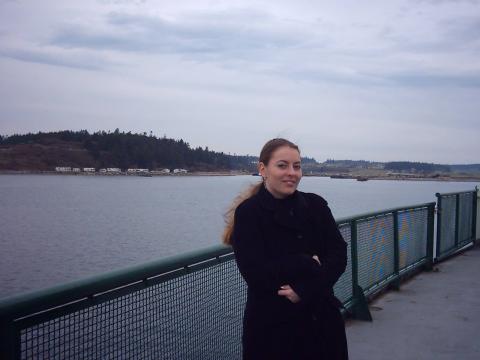 
Danica is from a small German town named Pfungstadt and first came to the US as an exchange student, where she ended up meeting her future husband and later decided to move here to live with him. She immigrated with a fiance' VISA and married her husband Michael soon after.

She told her story through Facebook video chat and it was recorded from there.

Her story is unique in the way that she really has two different first days: one as a student and the other as a citizen. Each one is represented in part in this story, as she has distinct memories of each time.


My name is Danica Groah and I am from Germany.

When I first left Germany I was a little bit concerned because I had no idea what to really expect because I had been with my now husband now for five and half, almost six years at that point, but we never lived together. So, like it’s kind of a gamble at that point.

In my head I kept going Crap what am I doing? Cause I am only 22 and I am moving to a foreign country.

One thing that stuck out to me immediately was size. Things are just huge here in comparison sometimes, especially when I look at the cars. Coming from Germany where there is not a lot of space, we have small cars cause there is no parking anywhere and the roads are smaller and over here, the first time I was over here and I look around at this really big Dodge Ram Ford f-150 or whatever driving next to the bus, which is already big and I’m like “holy shit, what is that thing? Is that a tank?”

A week or so after coming here, we ended up taking a quick break house sitting for friends just for a couple of days. A just during that time and looking around and taking in the scenery and everything, riding the ferry and I just looked around I was like “Ok I guess this is my new home or will be my new home."