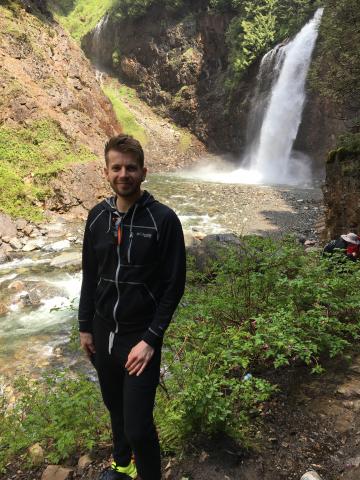 
George Filip moved to the United States at the age of 21, speaking an extremely minor amount of the English language. He first lived in New York for two months, then Chicago for twelve and a half years, and now lives in Washington state. He is a successful hairstylist in Washington, with 10 years of prior experience working as a stylist in Chicago. He taught himself how to cut hair originally, cutting the hair of many friends at home, and then he decided to attend school in order to really make his dream a reality.
He is passionate about the great outdoors – he loves to go fishing and hiking, which is why moving to the state of Washington was a perfect move for him. He sees the U.S. as the country of opportunity and hard work.


My name is George Filip. I come from Romania. I moved to this country when I was 21. My first place in the U.S. that I came to was actually upstate New York. My father was waiting for me. The humidity, the air – it was just totally different. I was born in the second largest city from Romania, which is surrounded by mountains. Or let's put it this way: Very similar copy of Seattle. I felt like this is where I feel better or belong. And then when I came multiple times over here, and I realized what you guys have in this area, I'm like "okay. Seattle it is, Washington it is for me." So… Came over here. No money whatsoever. I started driving a taxi. That was the best way to work night shifts and then being morning to during the day at school. There was no time for me to wait. So, I've been going full-time, even over full-time actually. The moment I bought the salon was January 2016. I have never worked in my life so much. Like that's how everything went from literally cutting hair in bathrooms, basements, people's houses, then to working at a salon, moving on my own, to owning the place, and moving here and now pretty much starting again from the beginning. Coming over here and not being lazy, let's put it this way, you have to work by starting already in a deficit being actually without parents or any money or any income or any social security or any papers. There has been a lot of work behind, like I've been working a lot and I finally get to have what I have now, and I'm very happy with what I have. So, what I wanted to say with this is the U.S. gives you actually the option and opportunity to work and gain a better life. This is what I appreciate about this. I will never move back from here, like this is my home now. It’s a country of opportunity. You can make it.