"And it turns that he was hanging around at the airport to recruit Indians coming fresh off the plane." 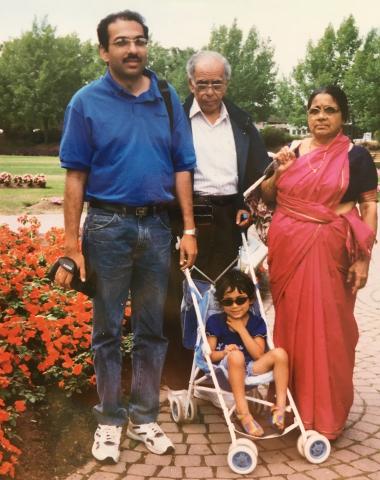 So before you came to the U.S. where were you living?
I was living in Mumbai, or Bombay as I still tend to call it.

And what year did you come first to the U.S.
My first time was in November of 1986.

So, what was your reason for coming to the U.S.
I got sent by my company to work on a project.

What was the project?
The project was to work on some banking software.

Tell me a little bit about your journey and where you first arrived in the US?
Sure, I remember flying into JFK in New York. My project was in Connecticut. So, one interesting incident I remember from when I landed was that I had to actually go from JFK to Newark Airport where someone was going to pick me up and drive me to Connecticut. So I took a shuttle to Newark Airport. And it was I remember November and quite cold. So I was waiting inside the airport for my ride to Connecticut and I was probably looking a bit lost and one very friendly Indian person approached me and started chatting with me and then shared his information and gave me a business card and said I should call him any time if I needed any help. And then he explained to me that he was working for himself, he had a business, and so on and so forth, and that, you know, is really the best thing… to achieve the American dream is to start your own business, etcetera.

Later on, I found out that the guy was with this network marketing organization called Amway, which is kind of pretty infamous. And it turns that he was hanging around at the airport to recruit Indians coming fresh off the plane. So, yeah a pretty desperate recruiting technique. So that was something funny and interesting that happened to me moments after landing in the U.S.