"My non-Indian teachers, colleagues, friends, neighbors, and even strangers found these Indian clothes curiously interesting. In fact, a local newspaper, called Fargo Forum ran a feature spread in their Sunday interest section, displaying photographs of me around campus in my Indian clothing. The feature was titled 'They like their saris!'" 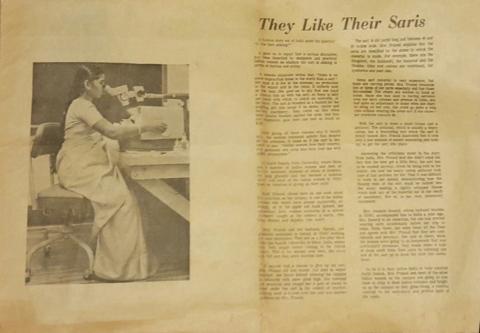 Which country and city were you living in?
I was living in India in a city called Ranchi.

Which state do you live in now?
I live in Texas, in the city of Houston.

What brought you to the US?
I wanted to pursue an advanced education but there were limited choices in the fields of study in India. Studying abroad provided opportunities and a valuable education. Both my husband and I received our PhD degrees from North Dakota State University in Fargo.

What mode of transportation did you take to Fargo?
My journey was long and arduous. In India, I traveled from Ranchi, Bihar (now Jharkhand) to Calcutta, West Bengal by car. I flew Swiss Air from Calcutta, India to Montréal, Canada, with a stop in Zürich, Switzerland. Once in Canada, I flew the regional Canadian Air from Montréal, Québec to Winnipeg, Manitoba. My husband and his friend picked me up in Winnipeg, and we traveled to Fargo, North Dakota, crossing the US-Canada border by car.

In Fargo, what did you do on your first day?
I arrived in Fargo on a Sunday afternoon. My husband introduced me to some Indian friends he had made and we all ate dinner together. The next day, my first full day in the USA, was spent on campus of North Dakota State University. I met my adviser and registered for classes.

What were some of the biggest differences between America and India?
Language was an obvious difference, but the overall culture and way of life are very different. I can offer some examples:

Language: I knew that English was the national language of America but even with the expectation, it was an adjustment to live life in a foreign language. Although I could read and write English, communicating verbally was different. Conversations were not always easy!

Way of Life | Physical Space: There was such a stark difference in the physical environment; I was so impressed at the cleanliness of places, the spaciousness of areas--like wide, paved two-way streets (highways), and the manicured look to houses and buildings.

Clothing: As I was accustomed to, I only wore saris or salwaar kameez! My non-Indian teachers, colleagues, friends, neighbors, and even strangers found these Indian clothes curiously interesting. In fact, a local newspaper, called Fargo Forum ran a feature spread in their Sunday interest section, displaying photographs of me around campus in my Indian clothing. The feature was titled “They like their saris”!

Culture | Behavior: In general, people were very hospitable, nice, accommodating, kind, and loving to us. During the first semester, I became very ill and had to drop all my classes (except debate) and stay home. Upon learning of my illness, my neighbor, who I had just met, began bringing me soup and bread for lunch!

We met another lady as my husband and I were walking to a Kmart after a doctor’s appointment, only a few blocks away. This lady, who was also driving to the Kmart, pulled over and offered us a ride, which we accepted. We ended up shopping with her and she kindly gave us a ride back to our house. Before leaving, she extended an even more gracious offer when she said, “You know, Thanksgiving is coming and I was wondering if you two would like to come to my house and meet my family.” Of course, we agreed, thankfully. I did not even know what Thanksgiving was, so later, my husband had to explain it to me. That sweet lady picked us up a couple weeks later on a Thursday, and that was my first Thanksgiving! It was wonderful!

These were some examples of the kindness and welcome we, a young immigrant couple, received from people we didn’t know well, and sometimes even strangers!