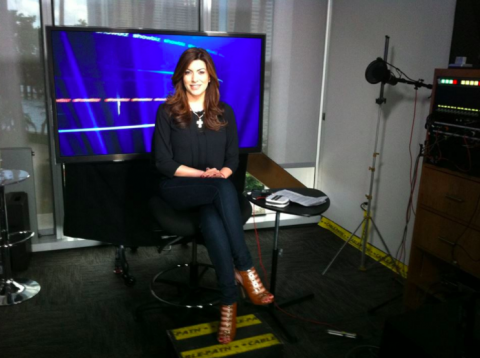 
Paula Lamas is a news anchor for KUNS, Hispanic broadcast in Seattle, Washington. Paula first entered the United States in 2003 and stayed because of the political upheaval in her home country of Venezuela. After living in Miami for 13 years, Paula moved to Seattle, which is where she tells her story below.


My name is Paula Lamas and I am a new anchor for KUNS, Hispanic news broadcast and I was 22 years old when I moved to the U.S. We stayed in the U.S. and I built my life in Florida state, specifically Miami. Then I moved to Seattle in 2015 on Thanksgiving. I remember that day because I used to have a tradition. I would wake up and have my breakfast in pajamas and watch the Macy’s Day parade, it was amazing and I loved it. That day I had to wake up very early and take my luggage to take a plane and come to Seattle. That was a long day, a long trip. I had my first Thanksgiving on a plane. I had a turkey sandwich with a glass of wine. When we arrived it was very dark. The only thing we could see at that point was Mt. Rainier, with all the snow. The next day was super beautiful. The sky was super beautiful, clear, blue, it was amazing. I think it was a sign to welcome me and my family to this place.