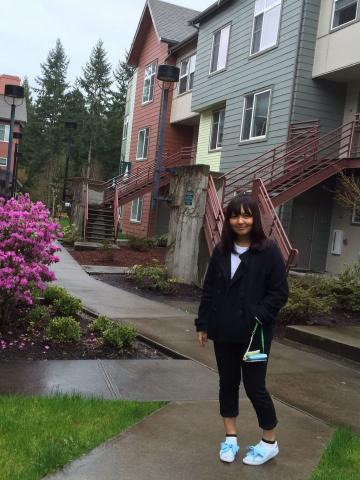 
Kirara Nagatsuka moved to the United States from Tajimi, a city located in Gifu, Japan in 2016. She was only 17 and it was her first time going to a big city all by herself. As a teenage girl being in a foreign country, she felt very sad and emotional after arriving. She immediately called her mom after she arrived at her dorm. Being away from her family and a place where she spent most of her life in was very difficult to her. Kirara felt so much better after calling her mom because she realized that even though she is away from her family, but she can still feel the infinite support she is receiving.

Kirara says that her first day was pretty hectic and tiring. After getting off from a 10 hour flight, she had to rush and find the person that is going to take her to her dorm. Kirara also suffered from jet-lag. Due to the different time zone in Japan and the United States, Kirara overslept and missed the first three hours of her community college new student orientation. It took her awhile to find her orientation leader and that was all she hoped for at the moment. Even though it was not the best day of her life, but she cherishes this experience because it marks her beginning life in the United States.


Hi, my name is Kirara Nagatsuka. I am a junior in the communications department. The very first day I landed was really tiring because Japan to U.S. is like more than 10 hours. I got there and there were people that's going drive me over to my dorm. I thought I can speak English a lot better, but I couldn't. So I felt really left alone and felt like, oh no, this is going to happen to me for like four years. I was kind of sad that I cannot communicate at the same time. I felt like I was like challenging myself a lot. And my first day in US was pretty hectic, I had an orientation back in my community college and it was from like eight or nine and because of the time difference in Japan and US, I overslept. I woke up at around like 11:30 and I was like 17 back then and I got into a panic. I had no idea where I have to go. So I like walked around half crying. Then I found the orientation leaders, they look like angels to me at that time and they took me to wherever I have to go. They took me to the advising office and I was so nervous until I saw them, cause I obviously overslept and it was my first time in us. So I was kind of worried about everything. But because of that experience, I felt like, oh, okay. I overslept on the first day. That means there's nothing worst that's going to happen to me so I kind of felt that confidence somehow and it was a really good experience actually.