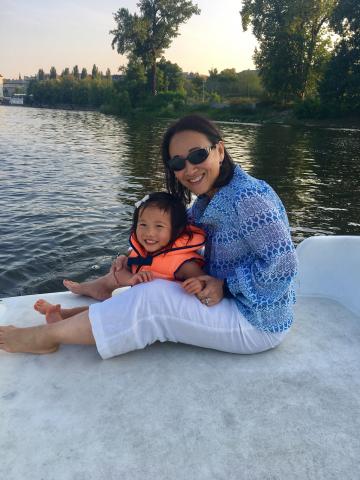 When student protests erupted on April 18th in response to the government’s treatment of Hu’s death, my mother laid to rest her hopes of ever dismantling Deng’s suppressive, subversive political system, and returned home to Jinan so as to avoid confrontation. Throughout April and May, protests continued to escalate until students began to camp out at Tiananmen Square and hunger strike. Fearful of the public’s growing support of the anti-government movement, high government officials agreed to meet with several of the student protest leaders, but agreements were often heated and unconstructive. Then, on June 4th, 1989, two weeks after Deng had declared martial law, Chinese military mobilized armed forces to forcibly remove the thousands of protesters that had gathered in Tiananmen Square, the heart of the protests. The number of students that died that day as soldiers opened fired into the crowds is still unconfirmed. My mother, who had not yet returned to school, relied upon word of mouth to hear who of her friends had survived and who had not. Devastated by the ruthlessness of her own country’s government and afraid she might be found out for participating in previous demonstrations, she elected to leave early for the Medical College of Wisconsin’s biology program that would begin in the fall.

The United States saw fleeing Chinese citizens as pioneers for democracy in a hostile Communist land and declared itself a democratic sanctuary. On June 5th, 1989, President Bush announced a military weapons embargo on China and, the following day, automatically extended all visas of Chinese nationals studying in the United States by one year. He also promised sympathetic review of visa requests and visa extensions for all other Chinese nationals in response to overwhelming public support to grant Chinese students studying in the U.S. permanent residency, which bode well for my mother who began the process of acquiring a student visa shortly after. President Bush later issued an executive order that allowed Chinese students to seek permanent residency without returning to China for two years first, which had been the policy prior to the massacre. The public’s and government’s support of Chinese students was largely motivated by democratic ideological convictions, but these also coincided with the United States’ general immigration policies at the time. These policies, which had been established in 1965, gave preferential access to skilled and educated workers in order to enhance the economic life of the country.

The massacre, however, had also prompted the United States to close one of the only three embassies in the country, so to obtain a passport and visa, my mother and her father traveled for a week cross country from Jinan to Beijing. The embassy saw only 20 to 30 people each day, and my mother and grandfather woke before sunrise for several days to wait in line and send in her application. After waiting several weeks to schedule an interview, she waited several more to hear whether or not her application had been approved, and then several more for her father to help her cover the cost of the plane ticket to Milwaukee which cost 4-6 months of her his salary. Nevertheless, this unique combination of geopolitical events, the Tiananmen massacre, China’s burgeoning population of university-educated youth, their recently established but influential and vital trade relations with the United States, and the United States’ domestic economy and immigration policies, facilitated a large, new wave of immigrants from China who were highly skilled and educated, within which my mother was included. The Immigration Act of 1990 only further supplemented this movement by increasingly prioritizing educated, rich, or skilled immigrants. Still, my mother would never have been able to benefit from these structural and political developments had she not also been able to successfully navigate through China’s education system. That feat had been conquerable because of her work ethic, her determination to overcome China’s structures of oppression by working within them, and her cultural capital provided to her by her upbringing. My mother, in the absence of adequate sociopolitical or economic agency, had employed her own personal agency to maneuver her way to a biology degree, a ticket toward greater sociopolitical and economic freedoms and opportunity.
She arrived in Milwaukee in August of 1989 with $300 for food and books, all that she had saved during her four years at FuDan University. Learning to speak fluent English as quickly as possible from the same pocket Chinese-English dictionary that had helped her pen her graduate school applications so as to keep up with her classmates, she found a partner to practice with, a friend, and a mentor, in the chairman of the biology department. She speculated that perhaps his Jewish ancestry and his parents’ own immigration to the United States from Europe before World War II had compelled him to guide her, a student fleeing possible political persecution at the hands of the Chinese government. So, four years later, he wrote her a glowing recommendation for her application for a post-doc fellowship at the Memorial Sloan-Kettering Institute in New York City. While in graduate school, my mother also met my father, with whom she had bonded over more than their shared experiences navigating foreign spaces. She had found love, and she felt extraordinarily lucky to be able to pursue it fully unrestrained by financial, social, or cultural duty. My mother also felt privileged in that he was willing to uproot and move to New York with her after learning that she had been accepted to study at Sloan-Kettering, finding his own position at a nearby hospital only after wholeheartedly agreeing to support my mother’s endeavors. Finally, she felt that fortune had blessed both her and my father, after learning that they would be granted permanent residence because they had entered the United States classified as young student activists fleeing political persecution in Communist China immediately following the Tiananmen Square massacre.

After four years in New York City and two children, commuting three hours to work everyday because housing closer to her work was far too expensive for my mother and father to afford, my mother felt blessed again when my father again supported her decision to shift career paths and pursue clinical medicine rather than biological research. Though my father’s parents fought bitterly to keep my mother at home taking care of her two children, reasoning that my father’s salary could comfortably support them, my mother found her work to be more a source of purpose than income. Though she felt waves of guilt leaving her children, wondering at times whether they deserved a more traditional household, she felt ultimately that she was setting a greater example for her children, something to aspire towards that was greater than traditional values.
The continued expansion of her career and thus, her socioeconomic and political opportunities after arriving and settling in the United States had, as in China, been made possible by her enthusiastic pursuit of more prestigious forms of academic distinction. Both her and my father’s bachelor’s and doctorate degrees also provided them the economic capital to more easily redefine their gender roles to fit their own desires. So, because my mother practiced unrelenting control over her own personal agency, manifesting resilience and tenacity, and through doing so achieved extraordinary academic accolades, she was able to subvert the systems of oppression in China that threatened her social, economic, and political freedoms and realize her full potential in the United States.