"The whole process of getting from Moscow to Seattle took me more than 24 hours and it was very tiring. " 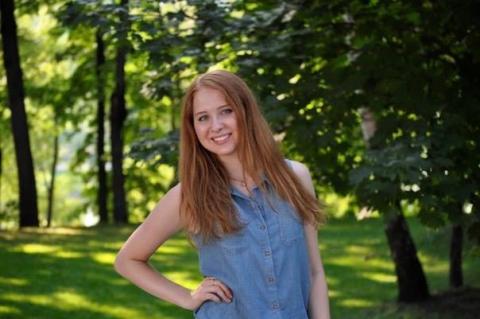 
They say that people are most comfortable with what they’re familiar with. Julia Zinchenko is not one of those people.

Upon arriving in JFK international airport after a seemingly never-ending 11-hour flight, a depleted Zinchenko was faced with a life-defining decision. Exhausted, flustered and slightly intimidated, she called her father back in Russia. She complained of being awfully tired and began to question if she could fulfill her initial plan of living on her own and attending college in the United States.

“Do you really want me to buy a return ticket right now?” he said. “I will do that if you need to come back home.”

Coming to grips with her ambition, she snapped out of it and was, yet again, determined to make the transition. She was on her own now, and that was exactly what she wanted.

Zinchenko, 20, was born in the Southern Russian town of Mozdok before moving to Moscow at a young age. She loves her country, but was looking for a fresh challenge after living her entire life in Russia.

“I really wanted to expand my horizons and broaden my perspective,” said Zinchenko, upon being asked what convinced her to leave the comforts of home and move to the United States.

After a friend had suggested studying abroad after attending university in England, Zinchenko knew she wanted to be independent and brush up on her English. Through an agency back home, she had opportunities to attend schools in San Diego and Arkansas among others. In the end, she decided on attending Seattle Central Community College, in a dark and rainy city she was only familiar with through Grey’s Anatomy.

Even though the Seattle area has a large Russian-speaking population, it didn’t have any factor in Zinchenko’s decision. Although she is aware of their significant presence, she never accessed the community, explaining that she came stateside to broaden her perspective. Wanting to stray away from what she knew so well, she took a different approach from many international students.

“When I came to the United States, I didn’t want to have Russian friends, because I wanted to talk to people from different backgrounds,” she said.

“Almost all of my friends are American or from other places in the world. My boyfriend is even from Mexico City.”

The pedigree of an American degree was another major draw to setting up camp in the Pacific Northwest, similar to many other international students.

“If I get a Bachelor’s degree here in the United States, then I will be able to travel anywhere and get a job,” Zinchenko said.

“In Russia it’s not the same.”


My first day in the United States was very emotional because I had some trouble at JFK international airport. The whole process of getting from Moscow to Seattle took me more than 24 hours and it was very tiring. When I came to JFK airport, I found out that my layover was only two hours and I had to go to another airport and I didn’t know anything about New York at the time—it was my first time in the United States. I started panicking because I had two huge bags and I was already tired of (the) thirteen-hour flight from Moscow to New York, but people seemed very friendly and they helped me figure how to find a taxi (and) how to get to the airport. I got on the flight to Seattle and I was thankful to all of the people who helped me. But then, there was a man sitting next to me on the plane. He was very friendly, he started talking to me and I really didn’t have any energy to talk and I was just replying to his questions. Then he asked me if I have a place to stay when I come to Seattle and I told him that the admission office at my college was already closed and I didn’t book any hotel room. So, I told him my story that I don’t have any place to stay and it’s my first time to go to Seattle and I didn’t know what to do. He was also very nice. When we landed, he told me that he had a room at the hotel next to the airport. He offered to book the room for me, but I got very scared because from my perspective, it’s not common in Russia for people to help other people if they don’t know them. So, I thought that he had some cruel intentions, and I didn’t accept his offer. But, since I didn’t have any place to go and I didn’t want to stay at the airport over night, I called the same hotel that he told me he stayed (in) and I asked them if there was a room booked for me. They said that, “yes there is a room booked for (your) name,” so I just went to the hotel and I slept for a few hours, then I woke up in the morning and it was very sunny. I came to my college and there was a taxi driver—he was also talking to me. When I came to the international office center, I started talking to them, and the taxi driver was helping me bring all of my bags into the office. I gave him a few dollars tip. Then, in a few minutes, he came back and I was surprised (about) what he wanted from me. Then he brought my iPod. I completely forgot that I asked him to charge my iPod! He put it in charge and then I forgot about it, and he came back— he drove away, and he came back and he gave me my iPod.