"Even though it was a tough transition I have grown to love this country and would make the decision to move to America again." 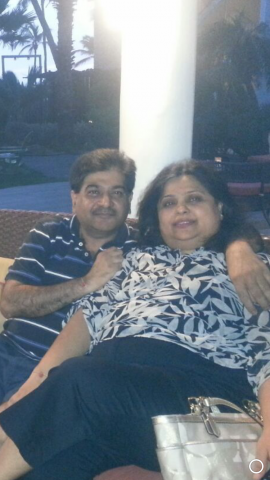 I was 23 years old when I immigrated to the United States. I distinctly remember holding my 1 year old daughter Pooja as we navigated the Chattrapathi Shivaji International Airport in Bombay, India. It was my first time on an airplane. I heard stories of my father’s friends flying all over the world when I was a kid and I felt excited to finally be in an airplane myself but scared at the same time because it was just me and Pooja who was crying for most of the flight.

We arrived in John F. Kennedy Airport in New York City on November 9th, 1988. I did not know any English and overheard some of the other passengers on my flight make fun of my accent, which made me really sad. I thought America was supposed to be accepting of these differences in culture. The airport was huge and I didn’t know my way around so I began following all the other immigrants until I found my husband Vijay at the gate. It was the first time I had seen him in almost 10 months as he left for America earlier on his visa to begin working and searching for housing for when we arrive. I remember it was freezing outside as we waited for the bus to bring us to our apartment in the Bronx. We didn’t have any winter clothes and it took us a week of surviving the harsh November temperatures until we bought a winter jacket.

The next two months were horrible. I grew very lonely and I was homesick. Vijay would end up working 16 to 17 hours a day and was always exhausted once he came home. I had no sense of direction. I didn’t know how to communicate with other people and I was too scared to travel New York by myself, especially in the Subway. I called my parents everyday, crying on the phone and expressing my eager to come back to Gujarat. I just had these high expectations of this American lifestyle everyone glowed about but I was just out of my comfort zone because of the cold weather and unfamiliar setting.

I knew I had to break out of my shell so I finally got a job at a local jewelry shop down the street. I began putting Pooja in a daycare center and my co-workers helped me with my English. As we began making more money from both our jobs, we moved to a larger apartment in the Bronx. The weather also started warming up and we began to explore more of these tourist sites like Central Park and Greenwich Village. My family and my co-workers at my first job were my biggest support. They told me that change does not come easy and it will take time to make adjustments. Even though it was a tough transition I have grown to love this country and would make the decision to move to America again.